Hidden Gems Along the C&O Canal 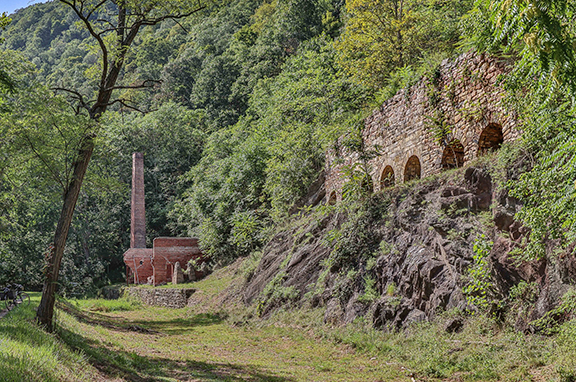 With more historic structures than any other unit in the National Park Service, the C&O Canal National Historical Park documents and preserves over 200 years of America’s history. The major sites, like Great Falls Tavern and the Paw Paw Tunnel, get most of the attention from visitors. However, many structures in the Park have a hidden history that is not apparent at first glance. Go hunting for these gems!

You can also copy this itinerary into our C&O Canal Itinerary Builder here.

Mile Marker 0.0
Mile Marker 0.0/Tide Lock
The Georgetown Tide Lock is the zero milestone terminus on the C&O Canal, and all measurements on the canal were calculated from this point; however, the construction of the canal did not begin here.

Mile Marker 1.0
Alexandria Aqueduct
One lone pier, the remainder of the north abutment above the Key Bridge, is all that stands of the once magnificent Alexandria Aqueduct. Also known as the Potomac Aqueduct, it was built between 1833 and 1843, and stood as a technological marvel of early 19th century engineering. Its purpose was to connect the C&O Canal to Alexandria via a seven-mile-long canal for trade and commerce. When the Civil War began, the federal government seized the aqueduct, drained the water, and converted it into a roadway to transport troops and supplies. After the war, it was converted back into an aqueduct with a toll bridge above. By the 1880s, the aqueduct was no longer in use. The wooden aqueduct was removed, and it was replaced with a steel truss structure that could carry heavier traffic to Virginia. When the Francis Scott Key Bridge was finished in 1923, the aqueduct was abandoned.

Mile Marker 2.3
Incline Plane
The Incline Plane was built in 1876 as a way to combat early traffic issues during the heyday of the canal. It lowered boats directly into the Potomac River to avoid boat traffic in Georgetown and delays there. Prior to that, some frustrated boat captains were having to wait two days to get into Georgetown from two miles away because of boat traffic. Since Georgetown was not the final destination for every boat and many just needed to go through Georgetown to access the Potomac River at the tide lock, the incline plane was created to enable boats to bypass Georgetown. A river lock wouldn’t work because the location where the backup occurred was more than 39 feet above the river at low tide. The Potomac Lock and Dock Company proposed the incline plane, which was a caisson into which a boat would float. The boat, encased in the caisson, traveled on the rails of the incline plane from the canal and descended into the river. It was balanced by two counterweights and powered by a turbine supplied with waterpower from the canal. This engineering marvel was the largest of its kind in the world. Unfortunately, it soon became non-essential as transportation on the canal dramatically declined in the following decade. The incline plane was seriously damaged during a flood in 1889 and was never put back into service. Today you can barely make out the incline straight up from the wayside exhibit along the canal.

Mile Marker 13.8
Stop Gate
Stop gates were constructed along the C&O Canal to protect the canal, its structures, and communities built around the canal from flood waters. This stop gate was originally built in 1852 and reconstructed with a modern winch system by the National Park Service in 2009. Located not far from the Great Falls Visitor Center, the top portion of the stop gate resembles a covered bridge but it’s actually a winch house. It stores a winch and planks of wood, just a little wider than the foundation. When the river floods, the stop gate is deployed to create a temporary dam that protects the canal downstream. The winch is used to lower the planks, one at a time, through the floor and into grooves that have been cut into both sides of the stone foundation. Some water does pass through, but the majority is stopped from rushing downstream into the canal and causing damage. The use of seven stop gates reduced flood damage and prevented additional devastation throughout the canal’s history. 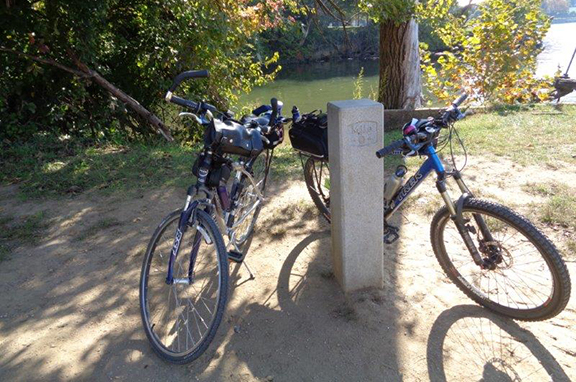 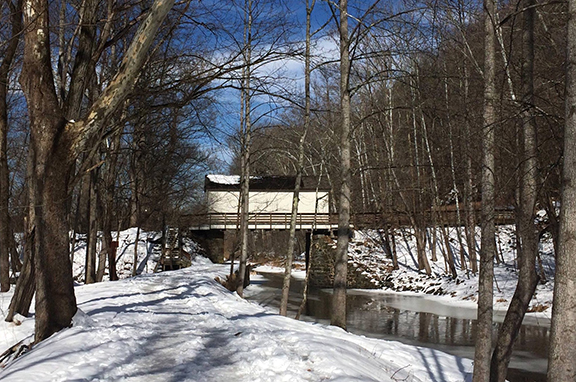 Mile Marker 14.4
Washington Aqueduct
Every day, more than 150 million gallons of water from the Potomac River detours into the Washington Aqueduct system to serve the water needs of the nation’s capital. George Washington devised the plan for this system in 1798, but no one took the project seriously for another 50 years. The aqueduct was built in 1859 by the Army Corps of Engineers and in 1864, water from the Potomac finally began making its 12-mile, mostly underground trip to the Georgetown Reservoir. The gatehouse for the original intake system, built from distinctive red Seneca sandstone, still stands next to the Great Falls Tavern.

Mile Marker 22.8
Seneca Stonecutting Mill
The Seneca Stone Cutting Mill was the center of one of the industries associated with the canal. It operated from 1837 to the early 1900s, milling stone from Seneca Quarry for many structures on the canal and public buildings in Washington, D.C., including the iconic Smithsonian castle on the National Mall. The mill’s water wheel, and later a turbine, were powered by water from the canal. The Seneca Stone Cutting Mill also cut granite and stone shipped from neighboring quarries. Granite and marble used in the U.S. Capitol and the Washington Monument were cut here. In 1901, the mill closed its doors for the final time, and in 1972, the state acquired the land and it became a part of Seneca Creek State Park. Today, the mill ruins are all that remain.

Mile Marker 30.9
Ruins of Jarboe’s Store
Close to Lock 25 are the brick ruins of Jarboe’s store. During the late 19th century and early 20th century, Eugene E. Jarboe ran a grocery and feed store, while also serving as postmaster at Edward’s Ferry. Gene’s sons, Sam and John, ran the store after their father tragically drowned in the lock while loading cattle. The store closed in 1906, and the NPS re-stabilized the ruins from 2008-2010. 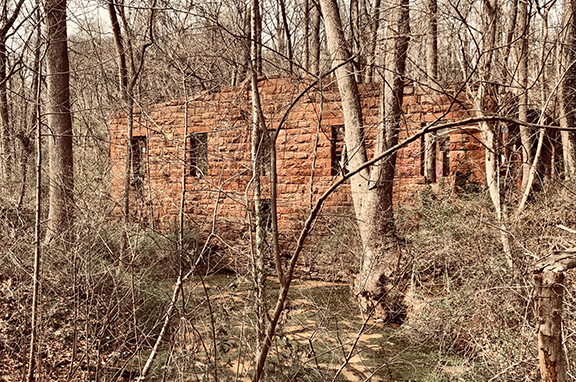 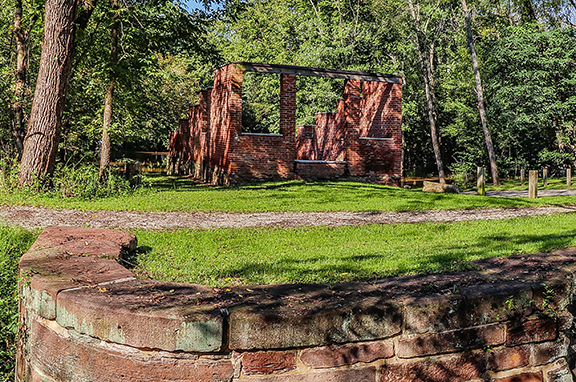 Mile Marker 58.0
Weverton and Casper Wever
Today Weverton is very quiet compared to what it once was. When Caspar Wever returned to his property just south of Harpers Ferry in 1836, after resigning from work as a superintendent on the B&O Railroad, he had grand plans to sell riverfront land to investors and create a community with water-powered industries. A ready supply of potential energy and a transportation network in place wasn’t enough for the project to succeed. The Potomac Company erected a large mill but it was never used. The Henderson Steel and File Manufacturing Company erected a building in 1846 and provided files to the Harpers Ferry armory until the approach of the war, around the time Caspar Wever died. A small marble-cutting operation set up shop but the factory never took hold. There was a hotel, a train station, and a saloon but since Wever’s idea for an industrial community never took off, the demise of the C&O Canal and the demolition of the train station brought Weverton’s importance as a transportation hub to a close. Today, other than trains passing by and traffic on Route 340, Weverton is a quiet location perfect for viewing wildlife.

Mile Marker 72.7
Thomas Swearingen Ferry/James Rumsey Bridge
After the Virginia General Assembly recognized the need for a proper river crossing in 1755, the Swearingen family began operating a ferry across the Potomac between here and Shepherdstown. The ferry operated for more than 50 years until John Blackford, who married into the family, gained a controlling interest in 1816. Blackford, who built and lived at Ferry Hill Plantation, had two slaves who operated the ferry until service was discontinued in 1850 and the Virginia and Maryland Bridge Company built a covered wooden bridge. Potomac Bridge carried travelers across the river, though it was destroyed several times. In 1939, the bridge was rebuilt again and named after James Rumsey, inventor of the steamboat. It now carries Route 34 overhead.

On December 3, 1787, Rumsey’s steamboat, which used a type of hydraulic jet-propulsion, made its debut in this calm section of the Potomac River. Hundreds of spectators witnessed the craft, which started at Shepherdstown ferry landing and made its way upstream at a rate of four miles per hour. A 75-foot monument sits on the hillside in West Virginia to commemorate Rumsey’s first-in-steam navigation.

Mile Marker 88.1
McMahon’s Mill
The mill here has been known by a variety of different names: Shanks Mill, Charles Mill (not to be confused with Charles Mill just below Dam 5), Avis Mill, Shaffer’s Mill, Old Flouring Mill, Galloways Mill, Cedar Grove Mill, and more recently, McMahon’s Mill. The mill was built on Downey Branch in 1778 to produce flour, feed, and plaster. The wooden overshot wheel was replaced by a steel wheel in the 1920’s, when waterpower was used to generate electricity here. The mill closed in 1922 after a flood and was later restored by the National Park Service.

Mile Marker 99.5
Bollman Bridge
The Bollman Bridge was constructed in 1879 and stands as a testament to nineteenth century engineering. This pony-Pratt iron truss bridge is one of the few surviving bridges built by Wendell Bollman, a pioneer in engineering of iron bridges. Prior to 1850, most bridges built in America were wooden. Bollman was a self-taught engineer who pioneered the “Bollman truss” design. 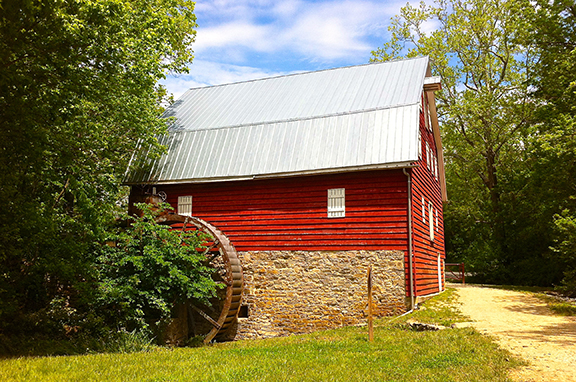 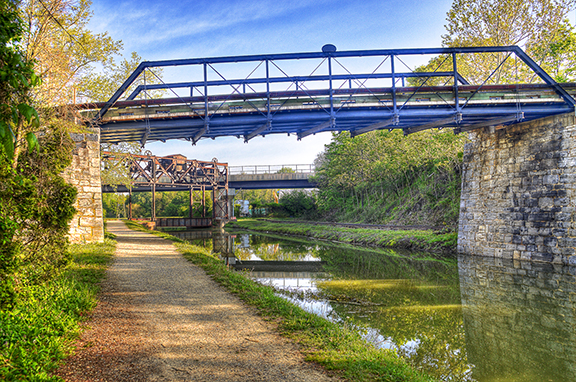 Mile Marker 124.0
Bowles House
The historic Bowles House is open seasonally as the C&O Canal Hancock Visitor Center. The house was built in the 1780s as a one-story structure overlooking the Potomac. The parcel of land, known as “Sarah’s Fancy,” was transferred from Lord Baltimore of England to William Yates around 1775. The Yates family occupied the house during canal construction until 1875, when it was acquired by the Bowles family. The Bowles family remained in the house until 1905. Many visitors enjoy sitting on the front porch and, on occasion, may have the treat of hearing a ranger or local resident play banjo or acoustic guitar.

Mile Marker 127.4
Round Top Cement Mill
When the C&O Canal was being dug in 1837, argillomagenisian limestone, a material well-suited for hydraulic cement, was discovered. George Shafer, who produced cement upstream, opened a cement mill in 1838 at the foot of Roundtop Hill. The mill provided cement for the remaining 60 miles of canal heading west to Cumberland. This mill even supplied cement for the Washington Monument, the Cabin John Bridge, and the U.S. Capitol. In 1863, the mill was sold and renamed the Round Top Hydraulic Cement Company. It quickly became one of Washington County’s most profitable businesses, providing jobs for 100 people during the Civil War. The mill was eventually put out of business by Portland cement, which was stronger and took longer to harden. The cement mill burnt and was rebuilt three times during its operation, including a fire in 1903 that greatly reduced the operation. Today the ruins of the mill and eight kilns, once powered by coal shipped downstream via canal boat, remain.

Mile Marker 166.7
Thomas Cresap gravesite and Ginevan House
For many years the grave of famous frontiersman Thomas Cresap sat unmarked and nearly forgotten. English-born Cresap, who was known in colonial Maryland as an Indian trader, a land speculator, a farmer and a soldier, died in 1787 and was buried here, overlooking Lock 70. Livestock grazed over the unkempt grave and Cresap’s headstone was knocked over. In 1939, someone moved the headstone to the Oldtown Methodist Church cemetery, a mile away. For the next 60 years Cresap’s grave remained unmarked in the middle of a cow pasture. During this time the land was owned by the Ginevan family, who built a Victorian home on the land, which remains today. In the 1990’s historians, descendents and the National Park Service were able to return Cresap’s headstone to its rightful place. Also on this site, the Ginevan family built an impressive brick Victorian home in 1878 that remains today.