The Bowles House has witnessed early settlement on undeveloped land, a race west between rail and canal, and a period of transition as advancements in transportation eased the country into the twentieth century, making life along the towpath obsolete. First traced to Lord Baltimore of England, the parcel of land known as "Sarah's Fancy" was transferred to the Yates family around 1775. William Yates developed the land and built the original one-story home on a hill overlooking the Potomac River in 1785. The Yates family lived there during construction of the C&O Canal which passed through Hancock in 1839. In 1875, during the peak of C&O Canal operations, the Bowles family acquired the property and remained occupants for nearly four decades. In 1905 the house and surrounding property were purchased by the Little family who resided in the home until the National Park Service acquired the land in 1960's; they were the last to witness canal operations. Today the Bowles House is the park's Hancock Visitor Center.

The result of a partnership between the Hancock Historical Society, the Town of Hancock, and the National Park Service, the Hancock Visitors Center opened in May 2010. Its exhibits share local canal and Hancock history while maintaining the look and feel of the house.

The Visitors Center overlooks Lock 52 and the Tonoloway Aqueduct on the C&O Canal at milepost 123.

Get Visitor Center hours on the Park website here. 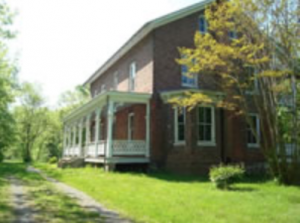