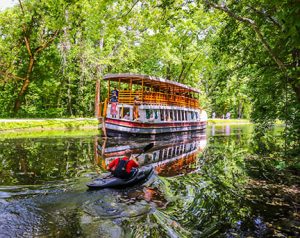 The Charles F. Mercer canal boat is passed in the C&O Canal by a kayaker. Photo: Paul Graunke

The Chesapeake and Ohio Canal National Historical Park runs from Georgetown in Washington D.C. to Cumberland, Maryland. The Park, locally known as the C&O Canal, preserves 200 years of America’s history and offers over 20,000 acres for visitors to enjoy nature and recreate. The C&O Canal Trust is the official nonprofit partner for the C&O Canal National Historical Park, dedicated to raising funds and managing programs to preserve the Park.

>> Download a one-sheet about the C&O Canal, including a map

Visit our Canal Quarters page to learn about this interpretive program. Seven lockhouses are furnished to depict different eras of the canal and are available for overnight stay.

The canal brought industry and prosperity to the Canal Towns. Now visitors enjoy the Canal Towns for the food, services, and unique history the towns provide. The towns benefit economically from trail tourism.

A variety of high-resolution photographs are available upon request.