Every day, 158 million gallons of the Potomac River detours into the Washington Aqueduct system and serves the many water needs of the nation’s capital. George Washington devised the plan in 1798 to help with the building of the young city, but no one really took the project seriously for another 50 years. Springs and streams closer to Washington better served the purpose.

In 1852, Congress commissioned a feasibility study and named Montgomery C. Meigs of the U.S. Army Corp of Engineers to head the project. After a grand groundbreaking ceremony attended by President Franklin Pierce and other dignitaries, the project dragged on for more than a decade. Finally, in 1864, Potomac River water began making its 12-mile, mostly underground trip to the Georgetown Reservoir.

You can find the gatehouse for the original intake system, built from the distinctive red Seneca sandstone, next to the Great Falls Tavern. The aqueduct has been updated and expanded over the years, and still carries water to Washington where it is filtered and treated for consumption. 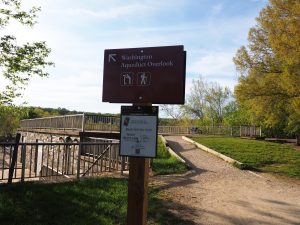