One of the most important misconceptions visitors to the C&O Canal have is that the canal started at Georgetown and headed west. That is not quite true.

Groundbreaking did not occur at Georgetown and the original plan did not include the small port town. Nearly six miles upstream from Georgetown, at Little Falls, the Potomac River becomes unnavigable for boats. Here President John Quincy Adams broke ground on the "Great National Project," an attempt to create a navigable passage from the Potomac River to the Ohio River and the western frontier. Only after the canal headed westward through Point of Rocks did construction focus on Little Falls to Georgetown.

Businesses immediately sprung up around the canal in Georgetown. Mule-drawn cargo boats filled to the brim with Western Maryland coal began lining up in Georgetown to off load into adjacent warehouses. Flour, paper and cotton milling also became successful industries in the town, using the canal as a new and steady source of water power. Many of the original facades of these buildings remain. If you look closely at the warehouses, you may even see old loops used to tie off the canal boats.

Although canal boats no longer travel the entire 184.5 mile length of the canal, it can still be done on either foot or bike on the original towpath. Many undertake this journey every year. They can often be found weaving through Georgetown in search of what they think is the beginning of the canal, the Tide Lock on the Potomac River at the mouth of Rock Creek. There you can touch Mile Post 0.

Next time you are out biking or hiking the canal, feel free to start at Mile Post 0... but also stop by Little Falls, the place the canal began. 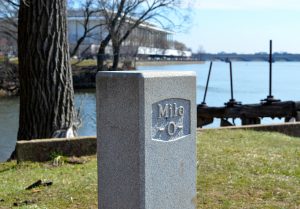