The C&O Canal had 11 aqueducts and 74 lift locks... but one was both a lift lock and an aqueduct! This engineering marvel is located at mile 22.7, at the mouth of Seneca Creek.

In 1830, just two years after the Canal's construction began, the builders halted at the mouth of Seneca Creek. For a short time, it was the farthest point west you could travel on the C&O Canal. Here, the canal company faced two challenges: the crossing of Seneca Creek, requiring an aqueduct, and a change in elevation, requiring a lift lock. An aqueduct is, essentially, a water-filled bridge that allowed boats to cross creeks safely. A lift lock is a water filled chamber used to raise or lower boats. The engineers decided to build one structure which encompassed both an aqueduct and a lock. Considering as I did the reality that everything seen was built by hand, without any of the modern construction equipment we now take for granted, it was a truly amazing feat! It was completed in April, 1832 at a cost of $32,000. 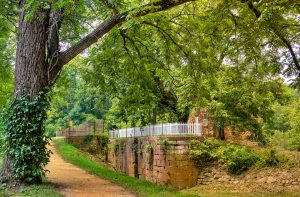