Walking through Four Locks, I am reminded of my childhood growing up in the Army. Each new post introduced me to a new close-knit community, new friends, and new things to explore. My community consisted of six square blocks where I knew my neighbors, walked to school, rode my bike to the store, and played with neighborhood kids at the nearby playground. I imagine the community of Four Locks along the C&O Canal was similar to my childhood experiences - everyone knew each other and shared in daily life.

Unlike many other canal towns, which were founded before the canal began, Four Locks began as private land and developed into a town after the canal came through. Named for the four locks that traverse this quarter mile section, over 30 buildings once stood here, including residences, warehouses, stores, a post office, and a one-room schoolhouse -- everything a child and their family would need.

Here, it is easy to imagine the canal filled to the brim with water and canal boats full of coal gliding by. I can picture the townspeople's day-to-day life -- adults purchasing ice at the warehouse to cool their drinking water and children walking to their school up on the hill. I also hear canawlers calling to the lock tenders or conveying news from upstream to the store owner. I think of it as a small town with one interstate cutting through it -- the C&O Canal.

Like all communities, changes occur. After the canal closed in 1924, many left in search of work elsewhere. Summer residences were built and boating and fishing became popular. Today, the summer residences are also gone and Four Locks is quiet. It's almost a ghost town. Visitors still boat and fish, others ride bikes, walk, or jog. Some even spend the night in the Canal Quarters at Lockhouse 49. However, a few of the historic buildings still remain and it still feels like a small town. It also reminds me of my own childhood and how even though things change, some things still stay the same. 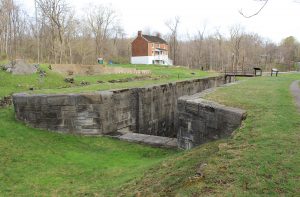