Many canal stories involve the canal's continuous reinvention of itself. For example, when it became clear that the railroad was far superior to the canal in connecting the Chesapeake Bay to the Ohio River, the C&O Canal Company stopped construction in Cumberland in 1850 and began running as a coal transportation company, moving the rich Cumberland coal down to the growing industrial center in Georgetown. The C&O Canal Company ran as such until 1924.

The Canal got a new lease on life again in the 1930s. When talk started on what to do with the abandoned canal, many people saw it as a perfect project for President Roosevelt's New Deal. Following the Great Depression, the New Deal created programs to put people back to work, improve infrastructure, and reinvigorate the economy. Two African American camps of Civilian Conservation Corps (CCC) workers were set up along the canal near Carderock. The CCC workers, and people working through other New Deal programs, improved the towpath, fixed locks, rewatered the first 22 miles, and refurbished several buildings along the canal, including Lockhouse 10. It was the first of many conservation efforts along the canal. These conservation efforts started a precedent for rehabilitating the canal for visitors interested in hiking, biking, kayaking and history exploration.

Lockhouse 10 has a "New Deal" again. The latest conservation effort is called Canal Quarters. The National Park Service, along with its partner, the Canal Trust, has rehabilitated several lockhouses including this one, and opened them to the public for overnight stays. Each house represents a different time period in the canal's history. Lockhouse 10 has been brought back to the 1930s when the CCC rehabilitated it. All of the furnishings and accoutrements are indicative of the 1930s, down to the family games in the living room. There are also many interpretive panels and a scrapbook inside to tell the story of the CCC and their work.

If you would like to experience this pivotal time in the C&O Canal's history, spend a night in Lockhouse 10. You might just find the inspiration necessary to reinvent yourself. Click here to book your stay in Lockhouse 10. 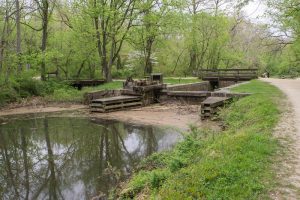