Originally constructed of timber in 1835, Dam No. 5 was an important source of hydro power for millworks on the river.  As soon as the dam was built, Edward Colston paid $100 a year for water rights and began the area’s long history of milling and hydro-electricity.

Unfortunately, the dam’s timber construction was no match for the many floods that swelled the Potomac River. The canal company decided a masonry dam would be stronger, but completion of the new 700-foot “high rock” dam was delayed by more floods and the Civil War.  In fact, the dam was a target for destruction on several occasions, but was successfully defended by local Union militia each time.

A guard lock let water into the canal from behind the dam. Remarkably, no lift locks were needed for the entire six-mile stretch from Williamsport to the dam. The brick lockhouse still remains, perched above the Canal on a hill.

The plant was converted to a paper mill for a short time from 1887-1891, and has been producing electricity since that time by several different power companies. 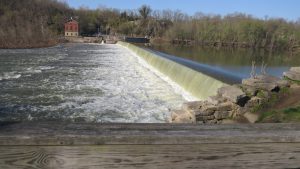