You might know that Clara Barton was a volunteer nurse and relief worker who founded the American chapter of the Red Cross. You might not know that her neighbors in Glen Echo tried to drive her from her home by building a roller coaster around it!

Barton moved to Glen Echo when twin brothers Edwin and Edward Baltzley persuaded her to relocate to an idyllic woodland community they called Chautauqua. They even built her a beautiful home. After the community collapsed due to rumors of malaria in the area, the surrounding property was converted into an amusement park. One of the park’s managers, Alonzo Shaw, wanted to convert Barton’s home into a hotel, and tried to persuade Barton to leave. When she wouldn’t, he tried other ways to make her leave. That’s where the roller coaster came in—and a ferris wheel in the front yard!

Barton was not intimidated by the “Coney Island” atmosphere and she lived in the house until her death in 1912. She lived a simple, self-sufficient life tending to her fruit trees and mending her own clothes. At one time, the house even served as a working headquarters for her relief operations and an unofficial shelter for troubled souls, including alcoholics, “former prostitutes, chronic debtors, and other misfits.”

Located just upstream from Glen Echo, the Clara Barton House is managed by the National Park Service and is open to the public for tours. 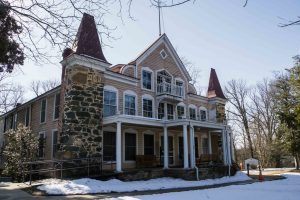