After 23 years at the C&O Canal National Historical Park — 16 as its Superintendent — Kevin Brandt is retiring on September 14, 2019. The C&O Canal Trust sat down with him as he reflected on his long National Park Service career.

Can you give us a summary of your earlier career with the National Park Service? 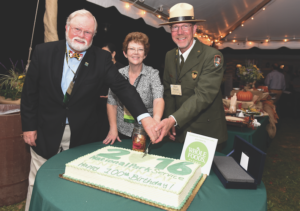 I started with the NPS in 1979 when I was still in college. I worked for a summer at the NPS Denver Service Center in project management at a bunch of parks — Grand Teton, Sleeping Bear Dunes National Lakeshore in Michigan, and Rocky Mountain National Park, Great Sand Dunes National Park in Colorado, others.

After my junior year, I took a year off school and went to work at Chattahoochee River National Recreation Area in Georgia. It was my first experience of working with the public and partners. I learned how communities connected with their national park both as neighbors and as tourism destinations.

I graduated from Ohio State University in 1981 with a degree in landscape architecture and got a job with the NPS in project management. In the fall of that year, I was sent to Yellowstone to work on a variety of historic structures including the reconstruction of the kitchen at Old Faithful Inn. We had to do all of the work in the “off season,” which meant during winter. It was very, very cold. All of the materials had to be brought in by snowmobile. I learned how to ski silently past bison on my way home, so close I could feel their breath.

Between 1981 and 1989, I did projects at a lot of different parks. While I was at Indiana Dunes National Park, an NPS colleague and I were involved in a head-on collision between two trains. Although we both had minor concussions, we provided emergency medical care to those who had been hurt, which led to us being awarded the Department of Interior’s Exemplary Act award.

From 1989 to 1991, I was back at Yellowstone and, in 1991, I took a position at the NPS Denver Service Center doing project management in parks in the Southwest, Southeast, and Midwest regions. During that time, I began to work with Doug Farris, who was Assistant Regional Director of Planning for the Southwest Regional office. When he left to become the Superintendent of the C&O Canal National Historical Park, I got his job.

What finally brought you to the C&O Canal?

My job became redundant, and I followed Doug to the C&O Canal as assistant superintendent. I was offered the position before the flood of January 1996. I had also been offered a job at Jean Lafitte National Historical Park in Louisiana, and after the flood, with 80 percent of the C&O Canal Park underwater, Doug gave me the option of changing my mind. I stuck with my decision, however, and when I got to Maryland in March of 1996, the NPS was deep into recovering from the flood. We had $23 million to work with, though, and we were making good progress—that is, until the second 1996 flood hit the following September. I was amazed at the huge outpouring of support and goodwill from the community. I saw how much people really loved this park.

I also learned another lesson at this time that I have carried with me to this day. All of us were working really hard on flood recovery, and we weren’t looking out for ourselves as we should have. In the fall of 1996, one of our maintenance staff was killed while felling a tree. I became interested in identifying the root causes of accidents. It was clear that most accidents happen when we let our guard down. As a result, we introduced training and processes into all of our Park operations that addressed the behavioral causes of accidents. Since then, we have had injuries on the job, but there have been zero accidental deaths.

Talk about some of the big infrastructure projects that have been completed while you have been at the Park.

There has been a huge investment in infrastructure. The rehabilitation of the Monocacy Aqueduct, completed in 2005, was the first big project. Before the rehab, it was listed by the National Trust for Historic Preservation as one of the 11 most endangered historic structures in the U.S. There were estimates then that it would cost $32 million to save, but we did it for $6.4 million.

One big project led to another. The Catoctin Aqueduct was in ruins with two of its three arches lying in Catoctin Creek.  A community group was launched — the Catoctin Aqueduct Restoration Fund, led by George Lewis – which raised $2.5 million to rebuild the aqueduct. It was a fascinating project because we were able to salvage so many of the stones that had fallen into the creek. They then had to be pieced together like a giant jigsaw puzzle. We could only do this because we had an outstanding maintenance staff. Dan Copenhaver, Randy Astarb, TJ Stottlemeyer, and Keith Kellinger pulled off incredible work. The rebuilt aqueduct was opened in 2011.

Big Slackwater has been the biggest project to date, costing almost $20 million. 2.7 miles of the towpath was washed away in the ’96 floods and, for 15 years, hikers and bikers had to take a 4-mile detour around the breach. We built a new raised towpath, more able to withstand flooding, that opened in 2011.

The rehabilitation of the Conococheague Aqueduct was another great example of what can be achieved with a great partner – in this case the Town of Williamsport – which lobbied hard to help the Park receive funding from the State of Maryland’s Transportation Alternatives Program (TAP).

The rehabilitations of the Canal Quarters (CQ) lockhouses have also been great projects. Canal Quarters has been the single greatest achievement of the Park’s partnership with the C&O Canal Trust. Without the Trust, CQ would not exist. Matt Logan, the founding President of the Trust, was very much part of the early thinking on this. We saw it as an opportunity to preserve these historic structures while giving visitors a deeper experience of the C&O Canal. The recent rehab of Swains Lockhouse and its addition to Canal Quarters has been particularly satisfying because we had so much to draw on, with so many members of the Swain family contributing their memories and photographs.

You were instrumental in the creation of the C&O Canal Trust. Can you tell us how it came about?

The idea of forming a philanthropic partnership originated with my predecessor, Doug Farris. It began to gain real traction after I became superintendent in 2006, and I talked to Matt Logan, who at the time was heading the Potomac Conservancy. He knew the philanthropic sector and what was required to start a nonprofit and, in February 2007, the Trust came into being. We started out small and took many of our cues from the Golden Gate Conservancy. I took a tour of Alcatraz, and I noticed that it was impossible to tell who was with the Park and who was with the Conservancy. This really informed how we saw the relationship between the Park and the Trust, developing around the idea of “shared DNA.” The idea was to build on the strengths of both organizations. In those cases where a national park cannot do anything without a legislative directive, a philanthropic partner can come forward to help accomplish a task or project. The key to a successful partnership between a national park and a philanthropic partner is to have an ongoing transparent dialogue. This is why it is really important that the Park and the Trust be co-located in the same building, so that we can have the kind of daily conversations that keep the relationship transparent and cohesive.

What has been your greatest challenge as superintendent?

When I first came to the C&O Canal NHP in 1996, annual visitation was less than one million, and we had 160 full time employees (FTE). Today, visitation is close to five million and, as a consequence of diminishing federal budget support, we are down to 62 FTE. This reality forces us to continually make choices about where we allocate our scarce resources. The safety of our employees, our volunteers, and our visitors has always been my first priority. This means spending dollars on law enforcement, excellent equipment for our maintenance staff, and ensuring that our staff and volunteers have the right training. Do we make cuts to Interpretation and Education? Well, if you cut too many of those programs, you diminish the visitor experience and lose opportunities to nurture the stewards of tomorrow. The challenge is to maintain a balance and to consider how we can sustain enough staffing in the functional areas of the Park for them to remain meaningful.

What would you consider your greatest achievement?

What I have enjoyed the most is establishing and strengthening the relationships between the Park and our communities and many stakeholders. Whether they are hikers or bikers or businesses in our canal towns or local jurisdictions, everyone has their specific interest in the C&O Canal. My job has been to bring together all of these interests to benefit the Park. We have taken on some complex projects that the Park could not do alone, but with our partners and supporters, we have always been able to find a way.

I am also proud of the way our Park has been a great place for NPS staff to gain a uniquely broad work experience that enables them to advance in their careers. I can point to 15 or 20 former C&O Canal NHP employees who have gone on to become superintendents elsewhere. The incredible variety of work opportunities offered in our Park has applications wherever they go in their careers, be that in the NPS or elsewhere.

What will you miss the most?

The people — the NPS staff, our volunteers, and partners — the whole community I have had the privilege to work with. In spite of the challenges and the different interests our partners and stakeholders bring to the table, we have always managed to get to the place where we are able to achieve what we set out to do and can share a sense of accomplishment.

Although I am retiring from the National Park Service, I am not leaving the NPS world entirely. My family and I are moving to Asheville, North Carolina, where I will be joining the Blue Ridge Parkway Foundation as a project manager.