The residents of Williamsport, Maryland, are proud of the history of this classic Canal Town. Whether conversing at the Town Museum in the Springfield Barn, or while walking through Byron Park, when watching a Little League baseball game at Conococheague Field, or while gathered around the C&O Canal Cushwa Basin during the annual Fishing Rodeo, Williamsport locals boast of the town's role in some of the biggest events in American History.

In October 1790, President George Washington visited Williamsport as he considered this town as the site for the new federal capital. During his trip he stayed at Springfield Farm, and corresponded with Revolutionary War hero and town founder General Otho Holland Williams while making his decision. Finally, Washington selected the current location for Washington, D.C., 100 miles down the Potomac River.

During the Civil War in 1861, the C&O Canal at Williamsport was threatened by Confederate bombardment from across the Potomac River. Union Captain Abner Doubleday and his unit placed their artillery on the edge of Riverview Cemetery, just above the canal. This earned the location the name Doubleday Hill. In July 1863, Williamsport suffered as the Confederate Army under General Robert E. Lee was cornered here for 10 days as the flooded Potomac River prevented their retreat after the battle of Gettysburg. The town was turned into a huge hospital; almost every building was used as a ward. Some town residents argue that if the Union Army, under General Meade, had attacked the Confederate Army of Northern Virginia, Lee and his army would have been defeated and the war ended right here at Williamsport.

Today, Williamsport is on the verge of regaining its past character as a canal town. Williamsport has more canal features within the half mile that the canal passes through the town than on any other stretch of the 184.5-mile canal. Plans call for work on the canal features to provide visitors a better glimpse into the town's past. So come to Williamsport and learn from the residents and park rangers about both the town and canal history! 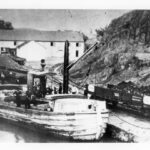 Williamsport served as one of the major coal wharves along the C&O Canal. The Western Maryland Railway worked with the canal to transport coal to inland markets. This scene from the 1870s would have been a regular site in Williamsport at the time. Credit: Chesapeake & Ohio Canal National Historical Park 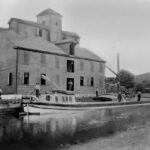 The Darby Mill was one of many industries in Williamsport that relied on the canal for water power as well as transportion of their products to markets along the Potomac River. Pictured here in the 1890s, the mill burned down in 1904. Credit: Chesapeake & Ohio Canal National Historical Park 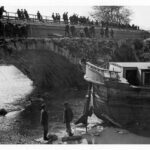 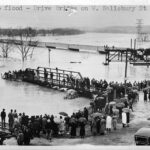 During the destructive 1936 flood, towns people from Williamsport flocked to the high ground just above the canal to witness the high water. Credit: Chesapeake & Ohio Canal National Historical Park 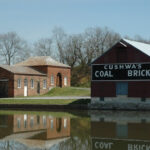 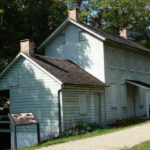 Downstream of the basin are Lock and Lockhouse 44. Stay tuned to Canal Discoveries to learn more about these and other structures near Williamsport! Credit: C&O Canal Trust 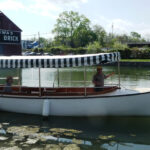 Yet another attraction soon to come to the basin is a replica canal launch. While the launch is currently in a testing phase, the idea is to eventually offer interpretive rides to visitors. Credit: C&O Canal Trust 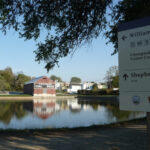 Williamsport is one of many communities along the canal to embrace and nurture the connection between towpath and town. As a Canal Town, Williamsport has added signs and maps to help orient visitors and direct them to their next destination, whether it be 27 miles downstream to fellow Canal Town Shepherdstown or a few blocks up the street to a ca Credit: C&O Canal Trust 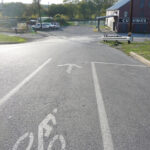 With the addition of bike lanes, Williamsport has provided cyclists with a safe route into town and back to the towpath. Credit: C&O Canal Trust

Thru-bikers continue their journey from Cumberland to Georgetown as they head on downstream toward the rail road lift bridge. Credit: C&O Canal Trust 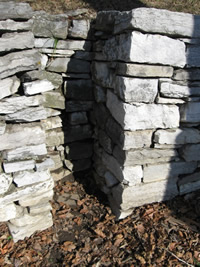 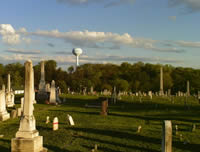 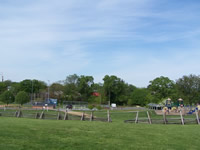 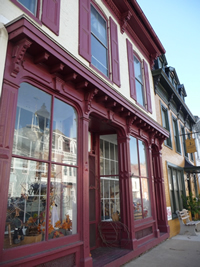