When the sun sets and the visitors have gone home, bats take to the skies over the C&O Canal National Historical Park. But these nocturnal and useful residents are facing a serious problem common to bats nationwide: White-Nose Syndrome (WNS). 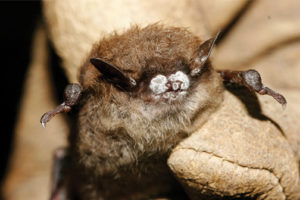 A fungal disease that preys on bats, WNS is considered one of the worst wildlife diseases in modern times, responsible for the deaths of millions of bats across North America, according to the White Nose Syndrome Response Team, an alliance of bat lovers. (https://www.whitenosesyndrome.org/). While it’s not known whether the fungus directly causes death, all bats infected with WNS succumb to what is essentially starvation and dehydration as the disease causes them to become restless in hibernation, awakening frequently, and exhausting all their reserved fluids and energy.

Some people, especially those who find bats creepy, may wonder, “Who cares?” They’re just little things that fly around crazily at night and scare the bejeezus out of people, right? Wrong. Bats are an essential part of our ecosystem, largely because of their startlingly big appetite for insects. A little brown bat can eat up to 1,000 mosquitoes nightly! As bat populations decline, insect populations go up, impacting our daily lives in ways both large (the agricultural industry) and small (the ambiance of our summer picnic).

And these powerfully important and often overlooked creatures are a natural resource of the C&O Canal. According to the Park, “The canal is home to 10 bat species and the largest hibernating population of bats in the state of Maryland.  Of the 10 known species that reside in the Park, at least six that hibernate in Park caves, tunnels, and mines are susceptible to WNS.”

In order to prevent the spread of WNS, which looks like a white fuzz on the bats’ faces, the Park has closed many of the structures where bats hibernate, such as the Indigo Tunnel in Western Maryland, to visitors. Whether bats are cute or creepy in your book, it’s undeniable that they’re a resource to be protected.