Life as a lock keeper on the C&O Canal

In its heyday, the C&O Canal was a 185-mile linear community. At any given time, as many as 530 or more Canal boats worked their way back and forth between Georgetown and Cumberland and points in between. 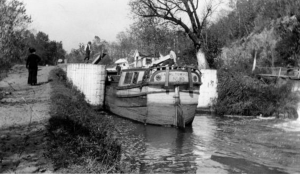 In the last decades of the canal’s operation, whole families often occupied the 12-foot square cabins aboard the boats, and young men often went from working on a boat to becoming its captain

But living on the Canal wasn’t reserved for just the boaters.

Lock keepers on the clock, from dawn to dusk

Each of the Canal’s 77 locks needed to be operational at any time during the daylight hours, and for that purpose the Canal employed lock keepers. Boatmen approaching each lock would sound the horn or shout “Lock ready!” to alert the lock keepers.

The 8-10 minute lock-through process usually demanded two people. Lock keepers were responsible for minor maintenance of the lock and the regulation of the Canal’s water level. Like the boat pilots, lock keepers lived in lockhouses with their families within a few feet of the locks.

For their ongoing service, lock keepers were provided with a rent-free home, an acre of land and $150 a year (raised to $600 by 1870). Standard lockhouses such as Swains lockhouse were 30 x 18 with a living room and kitchen on the first floor and two bedrooms on the second floor. Those built after 1836 added a basement and two end chimneys.

We didn’t mention bathrooms. That’s because Canal lockhouses didn’t have any.

Just outhouses. In fact, bathrooms were not added inside at Swains lockhouse until the 1900s. 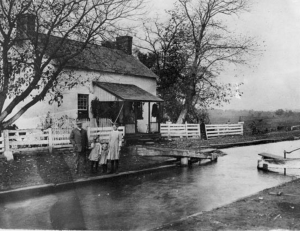 Locks were natural stopping places along the Canal (whether the boaters wanted to stop or not), so they were often gathering places for not only boaters and lock keepers, but also merchants and local residents. Businessmen leased land along the Canal from the canal company for feed and grocery stores, although they were not allowed to sell alcohol. The $36 annual rent was well worth it for feed stores. Mules towing Canal boats were consuming 25,000 barrels of corn, 3,840 bushels of oats, and thousands of tons of hay every year in the 1870s.

Even the lock keepers themselves supplemented their income by selling produce, bread, and yes, whiskey, to the boatmen (much to the disappointment of their employers!).

Much as roadway intersections give birth to activity and commerce, so too did the C&O locks provide the same kinds of opportunities for the Canal community.

How do we turn these run-down lockhouses into award-winning Canal Quarters? Find out here.