Known as "Magazine Lock" after the US Powder Magazine that was just upstream, lock 6 was where the canal truly began in 1828. Lockhouse 6 was originally built in the 1830s, but destroyed by the flood of 1847 and rebuilt in 1848. The historic lockhouse has been rehabilitated and furnished by the National Park Service, and its partner group, the C&O Canal Trust. As part of the award-winning Canal Quarters program, visitors can spend the night in the lockhouse and experience canal life in the 1950s and '60s. The lockhouse is fully decorated in that time period to help tell the story of the preservation efforts that led the canal to become a National Historical Park.

To reach Lockhouse 6 from Georgetown, the easiest way to get their is via an easy 10 mile round-trip bike ride:
Along the way, you will pass over a spillway, a low section of towpath that allows excess water to run out of the canal and back into the Potomac River
Just past the Key Bridge and Whitehurst Freeway underpasses, one can see the remnants of the Alexandria Aqueduct, a bridge that carried the canal over the Potomac River.
Near Milepost 3, you'll see the remnants of the Incline Plane. This feature lifted boats in and out of the Potomac River, so that not all boats had to deal with the traffic delays of going through the city.
Also just past lock 5 is the outer gate on Inlet lock #1. It can be accessed via a small dirt road on the left. Inlet locks are huge structures that are used to allow boat traffic to come into the canal system from the river. At the bottom of the gates, there are also small doors, called wickets, which allow water to flow into the canal. They are usually left open unless the canal needs to be drained.
Lockhouse 6 and Little Falls is only a little bit further. 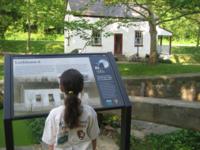 < Back to Tide Lock