After several years at the C&O Canal's Cumberland Visitor Center, I've found that most visitors ask many of the same questions. "When did the canal operate?" "What was life like for the people working the canal boats?" "What are the conditions of the towpath?" "Can you really bike from here (Cumberland) to Georgetown on the towpath?"

It is that last question that I always hated answering. Without trying to dash their enthusiasm, I would smile and reply "Almost, ...with the exception of Big Slackwater." It had been nearly 15 years since a park ranger, like myself, could say, "Yes!"

On a map, the C&O Canal meanders from Cumberland to Georgetown, hugging the Potomac River nearly the entire way. The 10-foot wide dirt/gravel towpath was continuous, all 184.5 miles, except for one small section between mileposts 84 and 89. It is this 2.7 mile stretch, commonly known as Big Slackwater, that I pointed out to visitors as the only "missing link" along the historic canal.

Big Slackwater is downstream from McMahon's Mill. Canal boats once entered the river here as the mules continued walking along the towpath. C&O Canal Company engineers chose to utilize the pools behind Dam 4 and Dam 5 rather than dig a canal prism because of rocky cliffs along the river. In 1996, severe flooding caused extensive damage to the towpath, making this section of the historic canal impassible for over 15 years.

For pedestrians and bicyclists traveling the canal, the missing section was first seen as a nuisance. Undoubtedly, it was an inconvenience to leave the peaceful serenity of nature along towpath to bike 4.5 miles on winding and narrow country back roads. However, this missing section also represented to many visitors that, despite their best efforts, they were incapable of biking the entire 184.5 miles of C&O Canal.

But, this has now changed! In the summer of 2010, the National Park Service began reconstructing the missing section of towpath and it was completed in the fall of 2012.

This much-anticipated project signified the completion of the canal once again and the reconstruction of the infamous missing link. I am happy to finally be able to tell visitors that, "Yes! You can now explore the canal in its entirety, 184.5 miles, from start to finish." 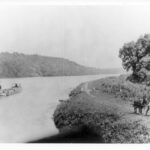 Pictured below is Augustus Asbury Hebb’s canal boat # 6 in Big Slackwater. Big Slackwater is the pool formed by Dam 4. Because of a rocky ridge that created a formidable barrier to the canal, it is actually ended at Inlet (or Guard) Lock 4. Credit: Chesapeake & Ohio Canal National Historical Park 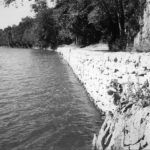 Along the pool of water created in the Potomac River from the back up of Dam 4, a towpath was created with a stone wall supporting the surface for the mules to walk on. Credit: Chesapeake & Ohio Canal National Historical Park 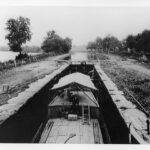 Boys traveling downstream just about to lock out into the Big Slackwater. The boat would enter into the Potomac River and travel in the pool of water created by Dam 4 before re-entering the canal at the river lock before the dam. Credit: Consolidation Coal Company Collection, Chesapeake & Ohio Canal National Historical Park 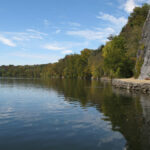 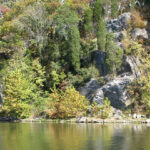 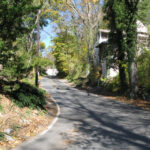 During construction, the towpath took park visitors on a winding detour through the countryside.Credit: C&O Canal National Historical Park 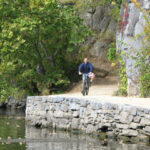 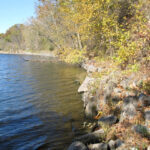 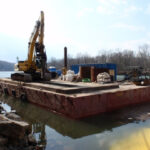 In August 2010, reconstruction of the ‘missing link’ began. Due to steep rock cliffs, workers created a work area in the slack water of the Potomac River. Credit: C&O Canal National Historical Park 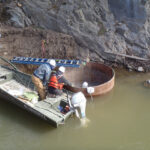 Reconstruction of the towpath is anticipated to be complete by December 2011. Credit: C&O Canal National Historical Park 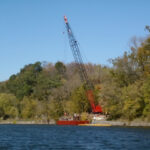 Reopening the 2.7-mile section of towpath allows visitors to travel the entire length of the canal from Georgetown to Cumberland.Credit: C&O Canal National Historical Park 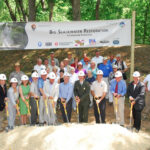 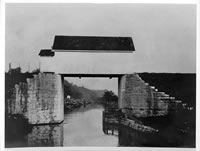 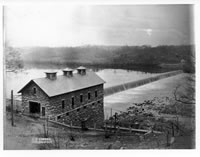 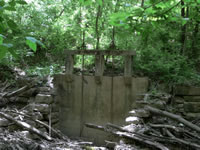