The C&O Canal National Historical Park (NHP) is beloved for its natural beauty, rich recreational opportunities, and accessibility for over five million visitors. What is less well known is that it is one of the most biologically diverse national parks in the nation. Since its creation in 1971, nearly 200 rare, threatened, or endangered (RTE) plants, some of which are globally rare and unique. But that number appears to be dwindling. Between 2008 and 2020, just 106 previously identified RTE species were found along the C&O Canal. Invasive non native plants, regional urbanization, and surging visitation have all taken their toll on the fragile habitats that make such diversity possible. With the addition of unfolding climate change, the National Park Service (NPS) is facing complex challenges to conserve these resources.

The C&O Canal NHP runs 184.5 miles and traverses four geographical provinces. From the Appalachian Mountains through the foothills of the Blue Ridge and the rolling farmland of the Piedmont, to its terminus on the Atlantic Coastal Plain in Georgetown, the Park contains a rich mosaic of different habitats that host 68 distinct plant communities, 12 of which are globally unique. These habitats are the result of a variety of geological formations, most notably the Potomac Gorge and the shale barrens of the Appalachian range. Frequent flooding along the Potomac causes tree canopy gaps, scouring, and silt and seed deposition along the length of the river. Many northern and southern plant species overlap in the Park with isolated populations of western species surviving where prairie habitat persists along the Potomac. Such diversity extends to fauna which depend upon these varied ecological niches to thrive.

Along the Potomac Gorge, the geology and hydrology of the river flowing over Great Falls has created a biodiversity “hotspot” comprised of the most diverse flora located within an urban area on the entire East Coast. Upriver, the shale barrens of Allegany and Washington Counties, constitute a globally rare natural community where RTE plant and animal species have adapted to its harsh conditions and unique community structure. The steep slopes, constantly weathering shale, and continual undercutting of the Potomac limits soil development leading to the evolution of rare species referred to as endemic species, found nowhere else in the world.

A Conservation Partnership with the C&O Canal Trust 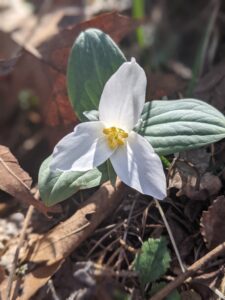 The only population of Snow trillium (Trillium nivale) in Maryland is found in the C&O Canal NHP. Image courtesy of NPS

With planning underway for the much-needed rehabilitation of the Billy Goat Trail System near Great Falls, NPS turned to the C&O Canal Trust in 2020 to request funding to support a youth botany fellowship program to survey RTE plants in and around the area. The purpose of the survey was to collect data from known populations and identify other threatened species to ensure that work on the trail system is sensitive to fragile habitats and endangered plants. This information will be used to identify and relocate at-risk plants or collect seed for their propagation. These efforts will ensure the continued survival of the plant species while providing sought-after outdoor recreational opportunities. As the C&O Canal NHP’s official philanthropic partner, the Trust was able to provide $64,757 to support this important work.

Over the spring and summer of 2021, the botany fellow located and identified 118 new and existing occurrences of RTE plants in the Great Falls area, and 261 RTE species occurrences Park-wide. They failed to find 91 species that had been previously known to exist in the Park before 2008.

NPS is seeking to ramp up long term conservation of RTE species throughout the C&O Canal NHP with a strategy that includes comprehensive identification, monitoring, habitat protection, seed collection, plant propagation, and establishing new populations of RTE species in habitat niches unique to the Park. For it to be successful, however, it will need the help of our canal community to supplement available NPS funding. In support of these important efforts, the C&O Canal Trust is launching a major gifts campaign to raise needed funds that will help protect this national biodiversity treasure.