An African American Engineer on the C&O Canal

By Tymber CompherFebruary 28, 2022No Comments

On July 4th, 1828, the President of the United States inaugurated the C&O Canal with much fanfare. The new C&O Canal Company had assumed the property of the bankrupt Potomac Company with plans to build a canal to the western frontiers. In the morning Pres. John Quincy Adams boarded a boat in Georgetown along with local politicians and foreign dignitaries for the 5-mile trip to the mouth of the Potomac Canal at Little Falls. The captain of the boat was a former slave named Captain George Pointer who had become a supervisory engineer for the Potomac Company. 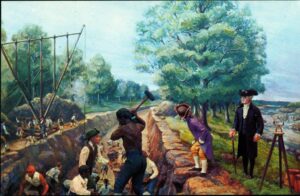 Pointer had been born a slave in 1773 and was “rented” by his owner to the Potomac Company when he was 13. The company was fulfilling a dream of George Washington to build canals around the falls in the Potomac to open up the American frontier to commerce. Pointer later described meeting the future president on Washington’s periodic inspections of the new canals.

Pointer participated in the first formal survey of the Potomac River in July 1789 and assumed increasing responsibilities for the supervision of work at Little Falls, Great Falls, and on the Shenandoah and Seneca Rivers. Eventually, he was able to buy his freedom and then worked the rest of his life for the Potomac Company.

In his company cottage near Lock Six of the C&O Canal, Pointer and his wife raised their three children and a granddaughter named Mary Ann. Mary Ann was ten years old when she accompanied her grandfather up the river with the American president in1828. She surely heard President Adams get a little carried away in his remarks about the future C&O Canal: “The project contemplates a conquest over physical nature such as has never been achieve by man. The wonders of the ancient world, the Pyramids of Egypt, the Colossus of Rhodes, the Temple of Ephesus, the Mausoleum of Artemisia, the Wall of China, sink into insignificance before it.”

One hundred years later Mary Ann’s own grandchildren told the Washington Post that she had not only met President John Quincy Adams that day but had danced with him to the music of the Marine Band. That night the President wrote in his diary that “I got through awkwardly, but without gross and palpable failure.”

George Pointer had been one of the first people hired by the Potomac Company and almost certainly the last one employed. In 1829 he wrote an 11-page letter asking the new C&O Company board members to avoid destroying his cottage where he had lived for over 40 years.  In his letter he summarized his long and eventful career with the Potomac Company and although there is no record of the board’s response to his letter, the next year the Census recorded the Pointer family with the same Black and white neighbors as those he had had in 1820. George Pointer died sometime in the 1830s, perhaps during the 1832 cholera epidemic that took a large toll on the free Black population living on the banks of the Potomac. 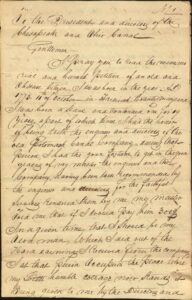 In the 1840s his granddaughter, Mary Ann, and her husband bought a two-acre farm in the most rural part of the District of Columbia, now called Chevy Chase, D.C. During the Civil War two of their sons joined the U.S. Colored Troops and while they were fighting in Virginia, their farm on Broad Branch Road was briefly invaded by Confederate troops before their retreat. Mary Ann and Thomas raised three generations of George Pointer’s descendants on that farm before they were forced to sell it in 1928 to make way for Lafayette Elementary School.

Today, the head of the Potomac Canal at Little Falls where Capt. George Pointer had taken President John Q. Adams is now used by world class kayakers training for competition. Eagles occasionally nest on the Virginia side of the river flying high overhead. The remnants of the Potomac Canal are still visible below them.

The information in this essay and much more can be found in the book entitled Between Freedom and Equality: The History of an African American Family in Washington, D.C. by Barbara Boyle Torrey and Clara Myrick Green. Georgetown University Press, 2021