The initial collection features a short-sleeved t-shirt with a rendering of the scenic C&O Canal towpath on the back. The shirts will retail for $24.99, and a portion of the sale of each shirt will support the C&O Canal Trust’s mission to preserve and protect the C&O Canal National Historical Park. The Trust is the official nonprofit partner of the Park.

Founded in 2010, Route One Apparel is the area’s original online source for trendy and affordable Maryland pride apparel and accessories. The company offers more than 3,000 unique products and designs and holds licensee agreements with many of the area’s most recognizable brands, including Old Bay, Utz, and National Bohemian. Route One Apparel merchandise is available online and at select retailers across the region. The company often partners with local nonprofits to contribute proceeds to deserving causes. 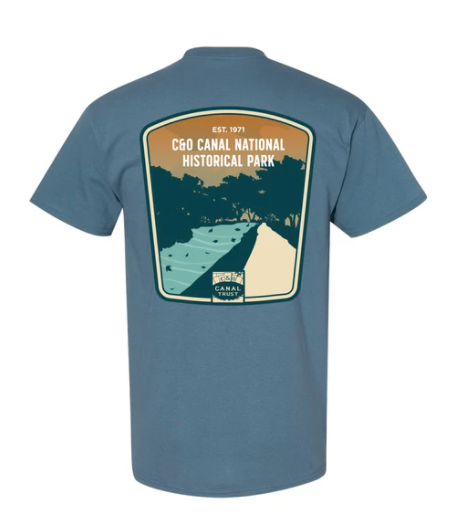 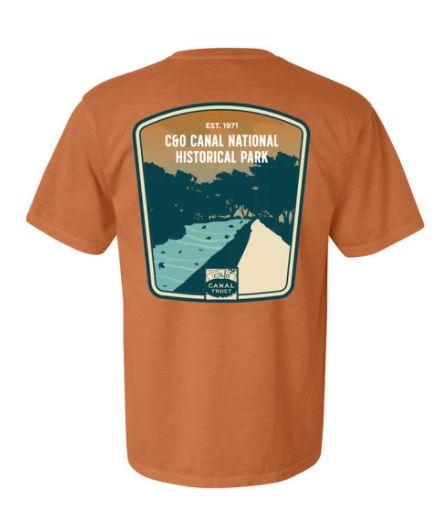 The towpath design will be available on both indigo blue and yam orange shirts in a variety of adult sizes on the Route One Apparel website. If the shirts prove popular, the Trust plans to release children’s sizes and three or more new designs later in the summer.

“We are thrilled to be releasing an apparel line featuring the C&O Canal,” said C&O Canal Trust President Robin Zanotti. “This is something we have wanted to do for several years, and our partnership with Route One Apparel enables us to tap into their knowledge of the market to produce fun, durable garments our supporters will enjoy wearing as they explore the C&O Canal. The sales will also benefit the preservation and protection of this important natural resource, making this a win-win.”

“At Route One Apparel, we are all about loving where you are from, and that certainly includes the many beautiful parks and natural resources our state has to offer,” said Ali von Paris, Route One Apparel Founder & CEO. “As the largest park in Maryland and a historic landmark, the C&O Canal has been a beloved place to visit for generations of Marylanders. Our team has really enjoyed collaborating with C&O Canal Trust on a design that we know our customers and anyone who loves the park will be excited to wear.”

The launch of the C&O Canal apparel line is timed to coincide with the 50th anniversary of the C&O Canal National Historical Park becoming a unit of the National Park Service. The canal itself dates back to 1828, when ground was broken on what was then an engineering marvel that would transport goods from the Ohio River valley to eastern markets. It paralleled the Potomac River, which was not navigable by ship, and saw mules pulling canal boats both east and west between Georgetown and Cumberland, where the canal terminated. Due to competition from railroads and a series of floods, the canal closed to boat traffic in 1924 and sat relatively abandoned until the 1950s, when a group of interested citizens, including Justice Douglas, brought attention to the canal’s plight. It was named a National Monument in 1961 before becoming a National Historical Park in 1971.

Today, the Park welcomes approximately 5 million visitors each year and is a major economic driver for the area. In 2019, Park visitors spent an estimated $98.4 million in local gateway regions, which supported 1,330 jobs. The Park draws its visitors from its surrounding communities and from around the world who come to ride the 184.5-mile towpath from Georgetown to Cumberland, MD, and the adjoining Great Allegheny Passage (GAP Trail), which stretches from Cumberland to Pittsburgh, PA. The 332-mile trek from the Steel City to the nation’s capital is a bucket list item for many long-distance hikers and bikers. The Park also preserves over 1,000 historic structures and conserves habitat for 113 rare and threatened plants and animals, while offering interpretive tours, hiking trails, overnight lockhouse accommodations, and a wealth of outdoor recreational opportunities.

The shirts can be ordered on the Route One Apparel website: https://www.routeoneapparel.com/collections/maryland-parks