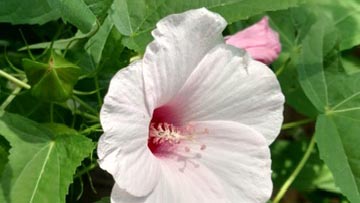 The C&O Canal National Historical Park has a new Botany Fellow, partially funded by the C&O Canal Trust. Clara Thiel is completing her Master of Science in Applied Ecology and Conservation at Frostburg State University, and for the next year, she will focus on surveying rare, threatened, and endangered plant species in and around the Billy Goat Trail System of the C&O Canal NHP.

There are currently 102 known rare, threatened, and endangered plant species along the trails in the Great Falls area of the park. “I have never seen such rare habitats, so I am excited and am looking forward to learning more,” said Thiel.

The purpose of the surveys is to collect data from known rare plant populations and identify other rare plant species to ensure that planned rehabilitation work on the trail system will not have a negative impact on the future of the habitats and species.

Each day, Thiel will conduct botanical surveys of identified rare, endangered, and threatened plant species and search for new species not currently documented in the park’s records.

The park provides some of the only habitats remaining for these plant species across the entire State of Maryland. The C&O Canal NHP plays such an important role for certain plant species that they would not continue to exist in this region without the park.

The Potomac River Gorge area of the park, which is home to the Billy Goat Trail System, is one of the most biologically diverse areas in the entire National Park Service and contains numerous globally rare plant communities. Due to the sensitivity of the area and the extent of visitation and development, the Potomac River Gorge is in constant need of protection and monitoring.

“The park is experiencing an increased number of visitors. Greater trail and off-trail use of the park, coupled with the spread of invasive plant species, threatens the long-term survival of these plant species and communities,” said Andrew Landsman, Natural Resource Program Manager for the C&O Canal National Historical Park.

The Billy Goat A Trail can see over 2,000 visitors a day. Dozens of informal social trails made by off-trail hiking litter the area, threatening the survival of these plant populations. The Billy Goat B Trail is currently closed to the public for visitor safety as well as the protection of rare plant species.

The park also recognizes that this trail system is an important recreational resource for visitors. “We are doing our best to create a balance between stewardship of these habitats and providing recreational opportunities for the public,” said Landsman.  “For some of these species, the park contains one of the only known locations in the region, and we have the responsibility to preserve them as best we can while still providing for visitor use and enjoyment.”

As Botany Fellow, Thiel is working to help identify species at risk of being disturbed or destroyed by the repair and rehabilitation of the Billy Goat Trail system and to inform a path forward for their protection.