By Tymber CompherDecember 14, 2020No Comments 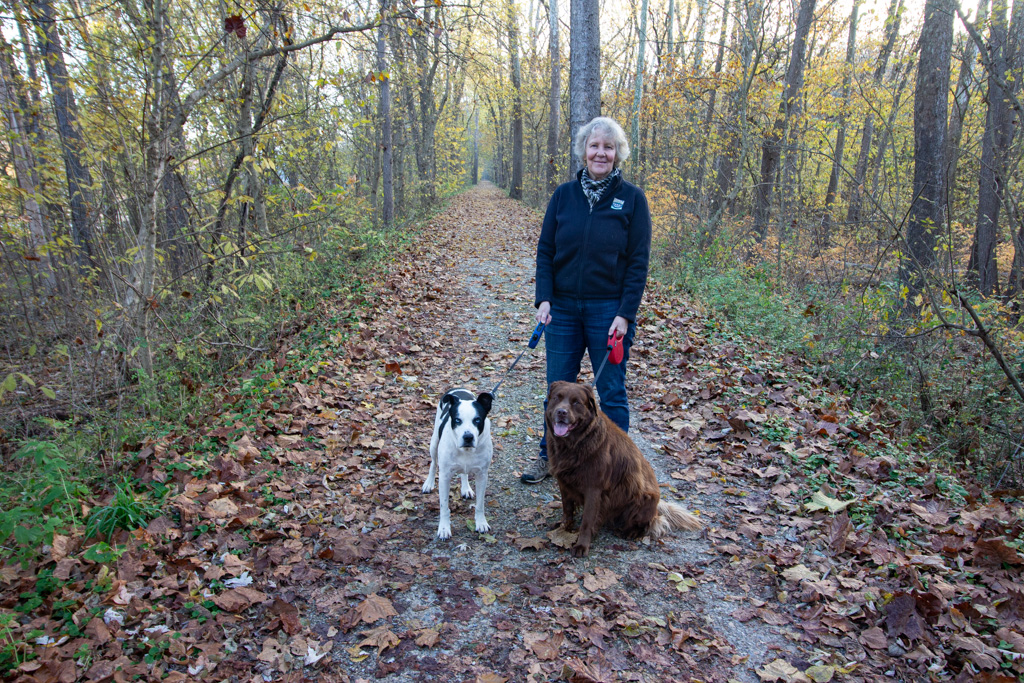 Patricia on the towpath with Sam and Chico

Forty years ago when I first visited the C&O Canal, I was 22 and the national park was just nine years old. After decades of flooding and neglect, much of the infrastructure we now take for granted was simply not there. Footbridges to the Great Falls Overlook had been taken out by Hurricane Agnes in 1972. There was no boardwalk at Widewater. Historic aqueducts were crumbling and much of the towpath was in very poor condition.

Newly-arrived in the U.S., I had grown up in what had been Rhodesia at a time when civil war made the countryside dangerous. But here, in the C&O Canal National Historical Park (NHP), I could enjoy my first taste of the beauty of America’s great outdoors, alone and in safety. I was enchanted. Next January, I will turn 63 and the C&O Canal will mark 50 years as a national park. I have never lost the sense of wonder that I felt as I first encountered Virginia bluebells, spied my first great blue heron, shared the joy of the spring peepers at Pennyfield, and, at Edwards Ferry, learned the hard way that snapping turtles prefer not to be handled.

In 2016, the stars aligned and I became the Director of Development for the C&O Canal Trust. I quickly learned that the passion I felt for the Park was shared by many others.Unlike iconic parks like the Grand Canyon or Yellowstone which people might visit once or twice in a lifetime, the C&O Canal NHP is deeply embedded in the everyday lives of countless people who visit it regularly. Like them, the landmark experiences of my life are overlaid with memories of the Park.

On January 31, 2021, I will be retiring from the C&O Canal Trust. It has been my joy and privilege to meet and work with so many people who care deeply for the Park and who have paid that devotion forward by giving their time, treasure, and talent to ensure that not only is the C&O Canal NHP safe and welcoming for today’s visitors, but also for those who come after us.

Happily, leaving paid employment at the Trust does not mean leaving the C&O Canal. My husband and I now live within walking distance of Taylors Landing, and we look forward to tottering along the towpath into our twilight years, our grandchildren impatiently waiting for us to catch up. I plan to continue to repay my debt of gratitude to the C&O Canal NHP beginning this year with a donation to the C&O Canal Trust’s Next 50 Years Campaign. I invite you to join me in ensuring this legacy for future generations at www.CanalTrust.org/Next50.

See you along the canal!