The resurfacing project that has so far as smoothed out 42 miles of the C&O Canal’s towpath between Edwards Ferry and Shepherdstown will receive another infusion of cash with a $1.147 million grant from the State of Maryland’s Transportation Alternatives Program (TAP). This is the fourth grant the C&O Canal National Historical Park has received in support of the “Towpath Rehabilitation: A Safe Towpath” project aimed at improving more than 80 miles of the 184.5 mile-long towpath. 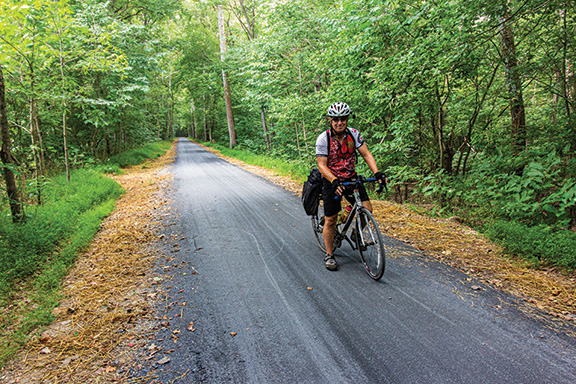 A biker enjoys the resurfaced towpath. Photo by Simon Barber

The Park’s successful application was supported by a C&O Canal Trust-led advocacy campaign and petition, signed by over 700 towpath users. To date, Maryland has committed $4.4 million to towpath resurfacing – enough, with matching funds from the National Park Service (NPS), to comprehensively rehabilitate a total of 69 miles of the towpath. The Park’s goal is to resurface 80 miles of the towpath in most need of attention.

Work is currently underway to resurface eight towpath miles from Violettes Lock to Edwards Ferry, with 5.5 miles from Swains Lock to Edward Ferry to be rehabilitated after canal dredging is completed between Swains and Violettes Locks. This year’s funds will support the repair and rehabilitation of 12.6 miles of towpath surface from the Shepherdstown Bridge (mile 72.8) to Big Slackwater boat ramp near Downsville (mile 85.4).

“We are extremely grateful for the State of Maryland’s partnership in helping to fund this project. The feedback on the new smooth and safe surface has been very positive. This project continues to be a high priority for the C&O Canal Trust as we secure funding and community support for the project,” C&O Canal Trust President Robin Zanotti said.

Construction will improve the towpath’s surface to one similar to the Great Allegheny Passage (GAP) Trail, which connects to C&O Canal NHP towpath to create one of the premier cycling routes in America, stretching from Washington, D.C. to Pittsburgh, PA. The Allegheny Trail Alliance, which administers the GAP, has generously donated engineering expertise and planning support to this project.  The new surface will be a vast improvement for trail users, making the towpath a safer and more enjoyable experience for the Park’s 5 million annual visitors.