The State of Maryland has announced that it would support the C&O Canal National Park Service’s towpath resurfacing project with a grant of $1.02 million from the Transportation Alternatives Program (TAP) for the third consecutive year.

The Park’s successful application was supported by a C&O Canal Trust-led advocacy campaign and petition, signed by over 500 towpath users. To date, Maryland has committed $3.27 million to towpath resurfacing – enough, with matching funds from the National Park Service, to comprehensively rehabilitate a total of almost 50 miles of the towpath. The Park’s goal is to resurface a 80 miles of the towpath in most need of attention. 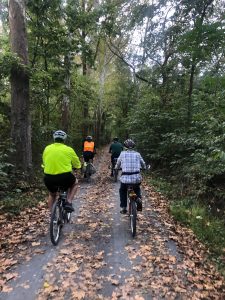 Following the completion of towpath resurfacing between Brunswick (Mile 54) and the Shepherdstown Bridge (Mile 72), the Park has begun to rehabilitate a new stretch between Whites Ferry (Mile 35) and Brunswick (Mile 54). Including the five miles from Edwards Ferry to Whites Ferry completed earlier this year, the Park has so far resurfaced 23 miles of the towpath. Its goal is to resurface a further 24 miles by the end of 2020. For more information and to make a donation, please go here.