C&O Canal Superintendent Kevin Brandt has announced his retirement from the National Park Service effective at the end of September 2019. Brandt helped to found the C&O Canal Trust 12 years ago as the official nonprofit group supporting the C&O Canal National Historical Park and has worked in partnership with us as we have grown our programmatic and philanthropic support to the park

Brandt’s career has included over 40 years of protecting, preserving, and sharing the resources of the National Park Service, including service at Yellowstone, Chattahoochee, Indiana Dunes, and Bryce Canyon, along with his 23 years at the C&O Canal. 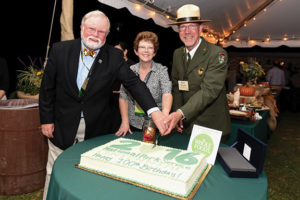 “Superintendent Brandt will be greatly missed by all of us at the Trust,” said Trust President Robin Zanotti. “Kevin had a kernel of an idea about a public-private partnership when the C&O Canal Trust was formed, and he’s been a driving force in our growth and success. His accomplishments on behalf of the Park over his 23 years of service are practically beyond comprehension. We wish him well in his final months at the C&O Canal National Historical Park.”

The process has begun to name Brandt’s replacement.