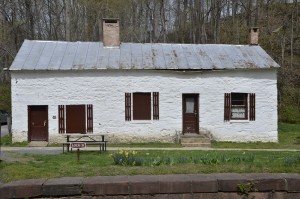 The first historic preservation effort at what would become C&O Canal NHP occurred immediately after portions of the C&O Canal were first acquired by the federal government in 1938. African American Civilian Conservation Corps (CCC) workers restored the lower 22 miles of the C&O Canal as parkland and re-watered the canal. Today still, the 22-mile stretch from Violettes Lock to Georgetown is the only continuous section of the canal able to hold water.  Learn more about the men who worked in the camps and truly built the national park you enjoy today here. 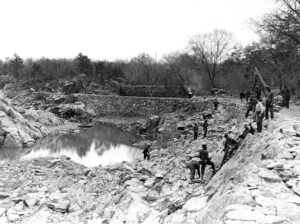 As the federal government continued to acquire and preserve portions of the canal, the question became “What do we do with it?” Keeping with popular activities of the time, the National Park Service in the 1950s proposed a parkway for the canal above Great Falls, to open recreational activities in western Maryland to the traveling public. Local environmentalists, along with Supreme Court Justice William O. Douglas, shined a light on the need to preserve the old canal just as it was: a place of refuge along the Potomac River. Thanks to the efforts of Douglas and other activists, the C&O Canal joined the National Park System in 1971 and is here for us all to enjoy today. Learn more about Douglas’s story here. 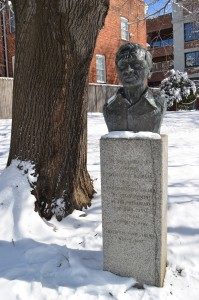 The lockhouses are some of the most historic structures in the Park and have been a major focus of preservation work. The C&O Canal Trust’s Canal Quarters program has thus far rehabilitated seven lockhouses, retaining their quaint historic charm and furnishing them in period detail. You and your family or friends can now spend the night in these gems, taking a step back in time to live life like the lock keepers did! For more information about how you can stay the night in a lockhouse, visit our Canal Quarters page. 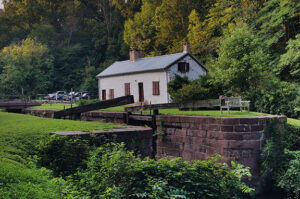 Swains in July by Carly Starke

One of the Park’s most recent major historic preservation projects was the restoration of the Conococheague Aqueduct. The multi-year project returned the aqueduct to its 1920s appearance, restoring it to become the first functioning aqueduct on the canal since 1924. Visitors to Williamsport are now able to see a lift lock and lockhouse, a railroad lift bridge, a canal turning basin and warehouse, and a watered aqueduct—the only place in North America with so many unique canal features in one place. 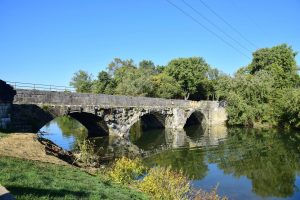 During the canal era, boats ended their journey down the canal in Georgetown, where their wares were then transferred to either train or ship to travel to markets up and down the east coast. The Georgetown area of the C&O Canal has undergone a revitalization all its own. The first mile of the C&O Canal was restored, with repairs to locks 3 and 4, and Georgetown Heritage is operating a new historic replica canal boat, much like the Mercer at Great Falls. The next step will be the opening of the Georgetown Visitor Center.

Not all preservation projects involve bulldozers and construction crews, however! Each year, we host thousands of volunteers in the Park who combine forces to form a preservation powerhouse! Called Canal Community Days, these events mobilize volunteers to assist with many projects in the Park, including painting historic structures; painting and restoring campgrounds; planting native gardens; raking leaves; spreading mulch; pulling invasive plants; and much more. Through these events, volunteers are able to get involved with projects that help to beautify and preserve the C&O Canal, so that it will be here for many generations to enjoy. Get involved here. 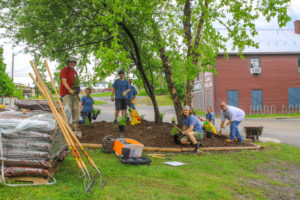