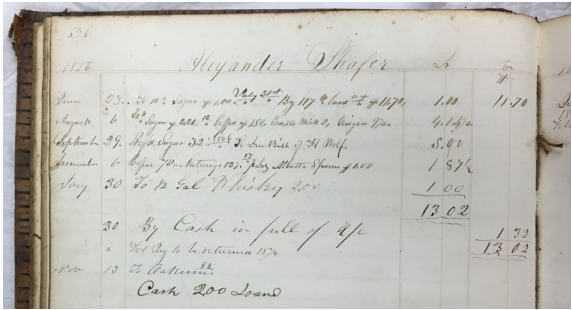 The archives of the C&O Canal National Historical Park (NHP) hold a merchant’s ledger (1856-1858) from Williamsport, MD that provides details about everyday life along the canal and insights into park history. The ledger’s more than 260 lined pages provide insight into the foodways, economics, and material culture of people along the canal whose stories have often become invisible to the historical record. 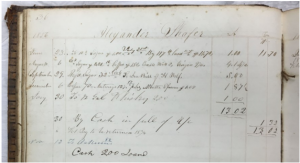 Generally, shopkeeper’s ledgers hold a wealth of information that crosses many disciplines, making them important historical artifacts for many different researchers. The information available from these ledgers can range from economic history to local genealogy.

The ledger from the C&O Canal NHP’s museum collection includes the names of more than 250 customers along with other details providing valuable information for members of the public who are looking for insights into the daily life of this area during the mid-nineteenth century.

During the main operating era of the canal, from the 1830s to the 1920s, canal boats hauling goods and people traveled up and down the canal’s 184.5 miles of water, from the Georgetown, DC, tidewater area to the terminus in Cumberland, MD.

Williamsport, MD, was an important center along the canal as it had many warehouses and manufacturing industries. But Williamsport’s shops also provided consumer goods and services for the people who lived and worked along the waterway. According to the ledger, consumers at this particular store purchased staples such as flour, sugar, coffee, lard, soap, and candles, but also bought specialty items.

Ledgers like this one provide important information about material items that are not typically excavated by archeologists. Everyday items on the list, which can easily be deemed unimportant, humanize the historical record by revealing similarities between then and now.

Details show how people interacted with shopkeepers but also how they conducted everyday business. The ledger records that on, September 9, 1857, John Harrigan paid his bill of $11.08 with $1.84 in cash and $9.24 “By Garden Stuff and Work.” Such details would not be found anywhere else but in a shopkeeper’s ledger.

This ledger is important to the history of the C&O Canal NHP itself. The ledger reports that Alexander Shafer shopped at the store seven times between June 1856 and January 1857. There is nothing extraordinary about his purchases, as they appear to be mainly food staples, like flour and such. However, who was Shafer? And how did he affect park history?

While the shopkeeper’s ledger does not hold all of the answers, it gave researchers enough detail to discover that Shafer purchased an established mill complex south of Williamsport and adjacent to the C&O Canal on July 18, 1851. He would later try and sell the complex in May 1854. However, a property map dated 1859 still identifies the land as belonging to “A. Shafer.” Shafer’s mill property was ultimately purchased by the Department of the Interior for the C&O Canal NHP on December 22, 1975. Without the shopkeeper’s ledger, Alexander Shafer’s connection to the park and the general area would have been harder to discover.

Also researchers would not have been able to develop a relatively complete view of a man who played an important role in C&O Canal NHP’s history. The owner of the ledger and the location of the shop are unknown. However, the ledger provides important historical context to the park and the local area, gives researchers a glimpse into everyday life, and potentially provides additional context to the area’s archeological sites.

What other connections could be made if archival staff were able to transcribe, study, and make searchable documents such as this historic ledger? How would access to this information change how we understand the history of our parks? New perspectives await in the pages of this document, and others like it.