How do we find the right furnishings for each historic lockhouse?

The C&O Canal Trust is fortunate to have Robert Mertz as its friend and volunteer — Robert has furnished all six lockhouses in period style, and he is on board to bring the year 1916 to life in Lockhouse 21. But furnishing a lockhouse isn’t the same as furnishing a historic house museum, because the lockhouses host overnight guests. Each lockhouse needs to accommodate up to eight guests at a time, and all of the furnishings will be touched, sat in, slept in, and cooked on. 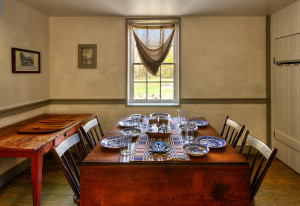 The dining room in Lockhouse 25.

Robert tells how he approaches the project: “I start with the target that we have to provide accommodation for eight people, which means sleeping and eating. We typically have only four rooms per house —  two bedrooms upstairs with four beds each, and two rooms downstairs with seating for up to eight. (Swains Lockhouse has six rooms). Then I consider the interpretive theme, which sets the time period in which the house has to be furnished. This means that the furnishings can pre-date, but not post-date, the period. Then I have to decide what sorts of furniture we need.”

Robert takes detailed measurements of each room in the house and makes a scaled furnishings plan using pieces of paper to ensure that everything will fit. For beds, he uses a combination of single, double, and trundle beds. As he figures out how to sleep eight people while ensuring they will have room to move around when they are awake, he assembles a list of the needed furniture, along with recommendations on sources and cost. He knows everything he selects needed to be durable, and also simple, “as befitting a lower income family” that would be living the life of a lockkeeper.

An antiques enthusiast, Robert locates most of the furnishings at antique shops, estate sales, and auctions. “Especially helpful has been a friend who handles estate sales. She found some amazing pieces that I had been looking for. I let her and several antique shop owners have lists of the furnishings requirements for the lockhouses, and they would let me know when they had a piece I needed. This is how I acquired some of our hard-to-find, iconic pieces.” 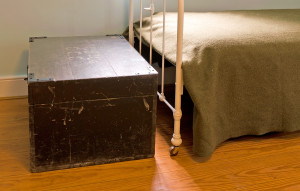 Lockhouse 10, located in Cabin John interprets the 1930s, when the Civilian Conservation Corps personnel lived in several segregated lockhouses while they worked to restore the canal from massive flood damage. Robert found U.S. Quartermaster Corps M1905 beds, including one that “came from a Sioux militaria dealer in Missoula, Montana whom I located through someone from a CCC camp in Ohio.” He also was able to locate a CCC chest owned by the family of Dr. William Knott, a CCC surgeon and doctor from Washington, DC who served in the 305th Company of the CCC in Cowans Gap,Pennsylvania during the 1930s.

Two other unique finds that furnish Lockhouse 10 stand in the kitchen – an authentic 1928 Westinghouse stove and a 1934 Kelvinator refrigerator, both restored and fully-functional. However, keeping them functional has been a challenge. As the closest repairman for such appliances is located in Georgia, the refrigerator has made several trips up and down the coast. 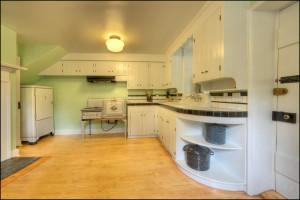 In instances where authentic furnishings cannot be located or are cost-prohibitive, Robert improvises. “For trundle beds in the nineteenth-century lockhouses (22, 25 and 28), I went to George Washington’s Mount Vernon and saw a trundle bed they allowed me to photograph and measure. I had a friend who was a skilled cabinet maker in Virginia make twelve of them.”

However, some very special iconic period pieces came from donations by people who learned about the project. One of the first was an authentic Simmons Hide-a-Bed covered in its original raspberry-colored fabric and manufactured in 1950. This piece now lives in Lockhouse 6. Most recently, a chapter of the Maryland Questers donated antique radios to the two most modern lockhouses – 6 and 10. Each radio was retrofitted to play MP3 audio files, and the Trust is currently researching period-appropriate music and radio shows for guests to download and enjoy on the radios, adding to the experience.

The dining room in Lockhouse 25.

Not every acquisition worked out, however. “My first set of four chairs was a mistake, as it turned out,” remembers Robert. “They were cheap — $90 for four — but with rush seats, they only lasted a year. It would have cost about $75 each to re-rush them, so we replaced them with more durable plank-seated chairs.”

Robert is now at work on the furnishing plan for Lockhouse 21. We will show you some of his finds in upcoming blog posts.

Meet interpretation intern Ellen Blackman and learn how she is helping us at Swains Lockhouse! Read it here!