By C&O Canal TrustMarch 7, 2014November 2nd, 2015No Comments
Canal Quarters, an innovative program that preserves and provides public use of historic lockkeepers’ houses along the 184.5-mile Chesapeake & Ohio (C&O) Canal, received the Advisory Council on Historic Preservation’s (ACHP) Chairman’s Award for Achievement in Historic Preservation in a Capitol Hill ceremony today. The Canal Quarters program was created and operates through a partnership with the C&O Canal National Historical Park and the non-profit C&O Canal Trust. 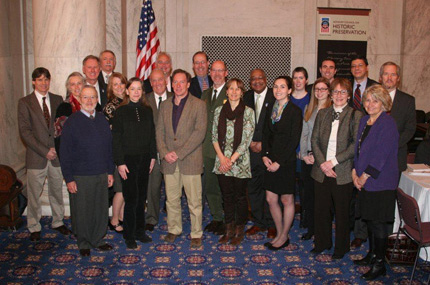 “It is remarkable that a project that was conceived only six years ago and began with a pilot project now has provided educational overnight stays for 10,000 people at six restored canal keeper’s houses along one of America’s original routes west,” said ACHP Chairman Milford Wayne Donaldson, FAIA. “This creates a model for other historic properties in public stewardship.”

The program, which began in 2009 and has shown an increase in users each year, to date has restored six historic lockkeepers’ houses along the canal towpath. They are available for overnight stays that provide immersive interpretive experiences for the public. The lockhouses, whose origins date back 170 years, are interpreted to present different periods in the life and history of the canal, including its operation from 1820 to 1924, as well as efforts for its preservation through the 1950s. The innovative program both restores and puts to appropriate contemporary use important historic properties. The park receives about 5 million users annually, many of them hikers and bikers, and the restored lockhouses are made available to the public through the Canal Quarters program.

“The Canal Quarters program demonstrates how a public–private partnership can work to preserve our nation’s treasures,” said Mike Nardolilli, President of the C&O Canal Trust.

The Chairman’s Award, whose purpose is to highlight exemplary accomplishments in historic preservation that can serve as models for others to emulate, was presented at the winter business meeting of the ACHP in the Kennedy Caucus Room of the Russell Senate Office Building. Donaldson presented the award to National Park Service Director Jon Jarvis, Nardolilli and Kevin Brandt, Superintendent of the C&O Canal National Historical Park, on behalf of their respective organizations. Among those attending were C&O Canal National Historical Park staff, volunteers and board members of the C&O Canal Trust who volunteer their time to make the program work, and Department of the Interior officials.