"The view from the top of the mountain is magnificent and will well repay any lover of the grand and beautiful in nature for the exertion necessary to climb to the top of it."

The construction of Fort Duncan began in October 1862, shortly after the Battle of Antietam and the surrender of Harpers Ferry to Confederate forces. The mission of the fort was to guard the land surrounding Harpers Ferry and Bolivar Heights, as well as traffic on the Baltimore and Ohio Railroad and Chesapeake and Ohio Canal. Located across from Bolivar Heights, Fort Duncan is the far left flank of the Bernard Line, a series of fortifications along Maryland Heights. Ever vigilant, the only action Fort Duncan saw was a small demonstration following Jubal Early's raid on Washington in 1864.

From Fort Duncan is a beautiful and strategic view of the C&O Canal. During the Civil War, the canal found itself on the boundary between two warring nations. It continued to transport coal from Western Maryland to the ports of Georgetown, thus fueling Washington, D.C., and its war effort. However, coal was not the only cargo shipped on the C&O Canal during the war. The Union also transported troops and supplies along the canal. This prompted the Confederate Army to consider the C&O Canal a target and make several attempts to destroy it. Cargo and mules were also stolen by Confederate raiders. Toward the end of the war, the canal company closed the canal to avoid more losses. 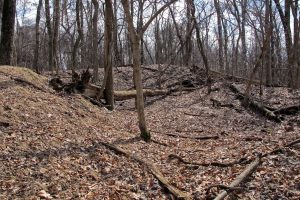 Photo by: Bud and Dell Cline