One of my favorite places along the C&O Canal is Widewater. Located between Great Falls and Anglers, Widewater has a natural wildness to it. It is easy to forget that it is man-made.

Although it looks more like a lake, Widewater is part of the Potomac River's historic path. At one time, the Potomac River meandered through it, passing east of Bear Island. As the river started to cut the Great Falls, it abandoned many of its channels. By the time the canal was to be built, the river was comfortably situated where it is today, west of Bear Island, and only a little water flowed in the old channel.

Canal engineers decided to use the old river bed as part of the canal to save on the effort of carving through more rock. They walled off the channel on either end of Bear Island with over 50 feet of dry laid stone, placing the towpath on top of that wall. The old river bed was then inundated with water to within a few feet of the towpath.

Most of the canal is only six feet deep and 60 feet wide, but not Widewater. In some places it is around 50 feet deep and almost 500 feet across. A small island lies in its center. With Bear Island on one side and the Gold Mine Tract on the other, the Widewater area seems protected from the outside world. On most days, it is quiet and serene. It is a great place to view the sunrise, bird watch, fish or take a flatwater kayaking trip.

Widewater is, however, a different place during a flood event. Since it was once part of the Potomac River, water on the downstream end wants to follow its historic path back toward the river, rather than stay in the canal. It is one of the canal's most susceptible areas to breaches, or breaks in the towpath. During the last major flood in 1996, so much towpath damage was done that bridges had to be built to reopen it to foot traffic. In 2008, Hurricane Hanna swept through, causing another breach further downstream. I was monitoring it when it broke. It happened so fast. It reminds me that despite everything humans do, it is impossible to ever fully control nature. 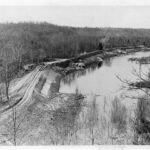 After the canal was purchased by the Federal Government, repairs were started to the area of Widewater. This 1940 photo shows some of the work done to the towpath during the time the Civilian Conservation Corps was repairing the canal. It shows the large waste weir (the series of piers under the towpath in the upper right quadrant) built in 1939. Credit: Chesapeake & Ohio Canal National Historical Park 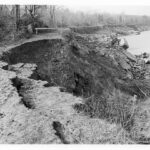 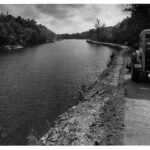 Additional repairs were made in 1970. In this image the photographer is looking downstream from the upper part of Widewater. Credit: Chesapeake & Ohio Canal National Historical Park 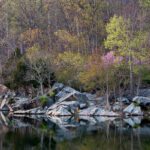 The rocks and trees on the banks of Widewater are reflected in the still water. Credit: Roy Sewall 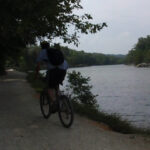 The length and width of Widewater gives the impression that the towpath is set between two rivers. Credit: Chesapeake & Ohio Canal National Historical Park 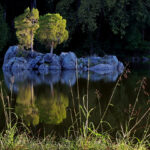 An evening stroll along Widewater offers peaceful views in juxtaposition to those of the falls less than a mile upstream. Credit: Gary Anthes 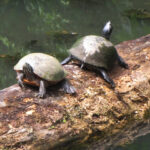 Take a closer look at the banks of Widewater and you are likely to spot local turtles catching a few rays. Credit: Chesapeake & Ohio Canal National Historical Park 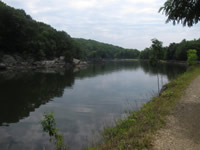 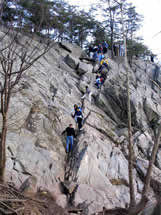 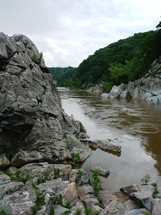