Less than the width of a baseball diamond. For a quarter mile at Point of Rocks, the space between the Potomac River and the mountain is that narrow. The C&O Canal Company and its arch rival, the B&O Railroad, were sure that both a canal and a railroad wouldn't fit there. Which one would get the land needed for their project? Who would decide? How long would the decision take?

These are things that intrigue me about Point of Rocks. The C&O Canal Company believed they owned that strip because their predecessor, the Potowmack Company, had owned the land. The B&O Railroad fought this and the dispute went to court in 1828. It took four years for the court to decide in the Canal Company's favor.

In the end the C&O Canal Company came to an agreement with the B&O Railroad because the canal company needed the money. They managed to squeeze a canal and railroad into this narrow strip. It still didn't quite fit. To make more room the B&O Railroad later blasted a tunnel through the hill next to the canal. Both companies operated side by side until the canal closed in 1924.

Standing on the towpath, I look out over the Potomac River and turn around to find the tunnel at my back. It's remarkable that both companies built on this narrow strip of land. Hearing a distant rumble, I step near the tunnel and breathlessly wait for the oncoming train. Two beams of light approach, illuminating the tunnel walls with orange and red light. As the train emerges into daylight, I wonder how the loud roar affected the canallers. I imagine the startled mules and the mule drivers struggling to calm them down. I think of the canallers looking at that train, maybe dreaming of taking that passing train to someplace new, sitting in style and watching the landscape go by much faster than on a three -mile-an-hour canal boat. Maybe they preferred the slow pace of canal life and the comfort of the familiar.

Today, I can appreciate the peace of the canal and the excitement of an oncoming train in the same location. Such is Point of Rocks - a clash between rival companies and the experience of both quiet and exhilaration within a quarter mile. 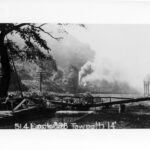 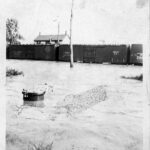 Beyond the fight between who had the right-of-way through Point of Rocks, both the railroad and the canal had to prepare for the inevitable flooding of the Potomac River. Credit: Chesapeake & Ohio Canal National Historical Park 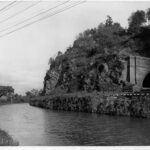 This photograph of the Point of Rocks railroad tunnel exemplifies why the fight between the railroad and the canal took place. Credit: Chesapeake & Ohio Canal National Historical Park 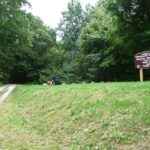 As you walk downstream from the parking lot, as shown in this photo, you will find more breathing room between the canal and the railroad. A walk upstream will take you right alongside the Point of Rocks Railroad Tunnel. Credit: C&O Canal Trust 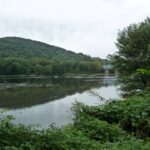 Even with Route 15 crossing the Potomac River into Virginia just north of Point of Rocks, this stretch of towpath is relatively peaceful. Credit: C&O Canal Trust 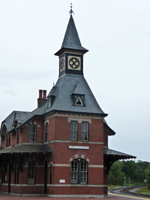 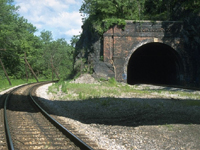 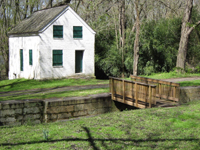