The area just below Paw Paw Tunnel was known, during the construction era, as Tunnel Hollow. In the C&O Canal construction plans from 1835, there were to be four locks—No. 63, 64, 65 and 66—built within Tunnel Hollow leading up to the Paw Paw Tunnel. As construction costs escalated and company construction funds diminished, it was decided that Locks No. 59-66 would be constructed as "composite locks," or locks made with more than one material. The materials chosen for Locks No. 59-66 were kyanized wood (wood treated with mercuric chloride to prevent decay) and uncut stone. Another cost saving measure was to eliminate Lock No. 65 and instead of having four locks lift 8 feet, the remaining locks, 63 1/3, 64 2/3, and 66 would lift 10 feet each to make up the difference in elevation.

The odd numbering for locks 63 1/3 and 64 2/3, as best anyone can determine, is a result of contractual language. The contracts for the sequentially numbered locks upstream were in process and rather than change the contracts the fractions were used. 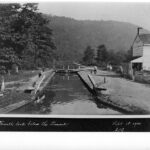 By Lock 62, fourth down from the tunnel, the locks resumed their normal numbering. Credit: C&O Canal National Historical Park 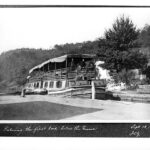 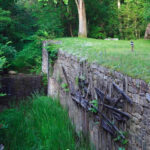 Some locks were extended, some had their gates altered, but Lock 65 was just never built at all. Instead, the locks in this area are curiously numbered. Credit: National Park Service 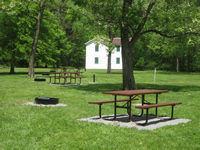 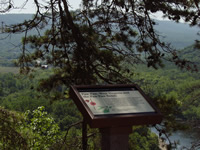