Standing on the bluffs overlooking the Potomac River near Blockhouse Point, your imagination can really transport you back to another time. It's easy to imagine being a Union soldier on guard in this remote area of western Montgomery County.

I think about being a member of the 19th Massachusetts Infantry, someone far from home. What would I think? How would I feel? I think I'd be homesick, lonely, and a little bored out here. Despite being part of a group, the remoteness would get to me. On the other hand, the idea of being in uniform and on guard along a boundary between two nations, where something could happen at any point in time, would terrify me. I might even feel a little relief that I wasn't in a large battle or on the front lines of the conflict. I could even find happiness in just surviving another day.

The specter of invasion and river crossings by Confederate troops would certainly cross my mind. Every noise and shadow in the night could be transformed by fear into hordes of rebel soldiers lurking nearby. If there was a skirmish here, would I be captured or killed? What will become of my loved ones if I don't return home? Are the locals even on my side? Or are they Secessionists? Might I worry that their kindness is only pretense?

The fort at Blockhouse Point was one of three earth-and-wood structures built in the area to protect the Potomac fords and C&O Canal from Confederate raiders. Built in the winter of 1862 by soldiers from the 19th Massachusetts Infantry, the fort took the form of a Greek cross. Although Blockhouse Point was located in Maryland, technically part of the Union, the area surrounding it was anything but hospitable. Montgomery County was a hotbed of secessionist activity. In addition, slavery was legal in Maryland, which gave the state an unappealing status to many northern soldiers. Scores of Northerners viewed the local populace with suspicion, wondering whether they were viewed as friends or enemies by the very people they were supposedly protecting.

Although no major engagements took place at the site, the fort itself became a casualty of war. In July of 1864, Union troops were withdrawn from Blockhouse Point to strengthen the defenses of Washington. Days later, Confederate cavalry under the command of Col. John S. Mosby destroyed the abandoned fortification during Jubal Early's raid on Washington City. The fort was never rebuilt. Archeological research has uncovered many artifacts from the location. Together with written records, they provide us with an intimate glimpse into the lives of the Union soldiers stationed at Blockhouse Point 150 years ago. 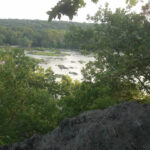 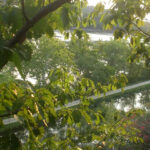 A hike up the bluffs at Blockhouse point are rewarded with an overlook of the canal and Potomac River. Credit: C&O Canal National Historical Park 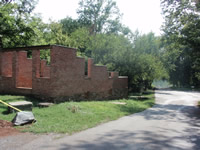 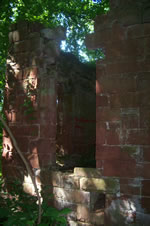 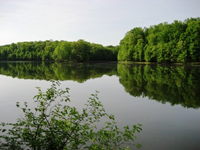