Located between Billy Goat Trail Sections A and B and just downstream from Widewater is Anglers, one of the most visited sections of the C&O Canal. The natural beauty of Anglers provides the perfect backdrop for walkers, hikers, bikers, kayakers, birders, fishermen, photographers, and painters alike. However, to Canal engineers, Anglers posed a problem: one that we are still dealing with today. As the park's civil engineer, I enjoy the scenic value of Anglers, but am also fascinated by one thing - how nature can make a place so beautiful, yet cause so much trouble. The answer lies primarily with one word: Rock.

Just upstream from Anglers, canal engineers decided to put an old river bed of the Potomac to good use. They constructed a wall on either end of Bear Island with over 50 feet of dry laid stone, and then inundated the area with water to establish present-day Widewater.

At the downstream end of Widewater, the problem began. They were met with rocky outcroppings which extended all the way to the shores of the Potomac. Rather than navigate the waters of the river, the engineers decided to blast off the rock to create an area suitable for canal construction. By doing so, they exposed several rock formations which otherwise would have remained hidden, including one of the most visible synclines in the entire park. A syncline is a downward fold of rock where the layers of the different rock strata are easily identified. The syncline at Anglers is just below the downstream end of Widewater on the opposite side of the canal from the towpath.

The rocks that were blasted off at Anglers were incorporated into a dry-laid stone wall between the towpath and the river which still stands and can be seen today. Recent explorations of the wall reveal that it is between 9 and 12 feet thick at the top, 16 to 25 feet thick at the bottom, and anywhere from 16 to 21 feet high. Such construction is quite an undertaking using modern construction practices. One can only imagine what the laborers of the 1830s must have gone through to construct the wall. Even more amazing is that it stood for almost 180 years before a portion collapsed in 2008.

Unfortunately, the wall did not solve the canal company's problems in this area. In many areas of the park, the canal was built directly on bedrock. At Anglers, blasting the rock to provide an area for the canal meant, ironically, that in some places, there was no rock directly under the canal. Rather, a portion of the canal here at Anglers was built on compacted earth. Recent explorations have indicated that competent rock, especially in the area of the current breach, was found as deep as 42 feet below the bottom of the canal.

Over time, this area of the canal fell victim to numerous heavy rain and flood events which washed away the compacted earth, and took the towpath and a portion of the historic wall with it. In recent times, Anglers has been impacted by the torrential rains of Hurricane Agnes in 1972, the floods of 1996, and Tropical Storm Hanna in September 2008. It was this storm that caused the current 125-foot breach in the towpath just upstream from Anglers Bridge. To provide for the continued visitor enjoyment of the area, a "bypass" towpath was constructed temporarily around the breach.

Less than a month after the breach, the C&O Canal Trust launched a $100,000 campaign for the repair of the towpath. These funds helped the C&O Canal National Hstorical Park rebuild the missing 125 feet of towpath, reconstruct the historic stone wall, and improve drainage to mitigate the heavy rains which have long plagued the area. Now that construction is complete, the canal at Anglers will be filled again with water, and visitors will again be able to marvel at the natural beauty while walking the historic alignment of the canal and towpath. With so much to offer for the walker, the hiker, the biker, the kayaker, the bird watcher, the photographer, and the painter, Anglers deserved nothing less than a return to its historic glory. 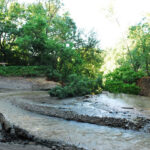 The gaping hole made the towpath impassible for pedestrians and drained the canal water into the Potomac River. Credit: Chesapeake & Ohio Canal National Historical Park 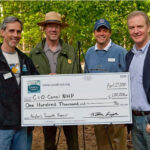 Less than a month after the breach, the C&O Canal Trust launched a $100,000 campaign for the repair of the towpath. Thanks to the support and generosity of the community, the campaign was a success. Funds paid for the geotechnical evaluation and design of repairs. Credit: Roy Sewall 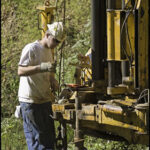 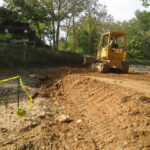 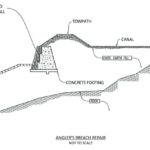 The park is implementing a long-term sustainable solution to limit future problems in an area where leaks have been a long-standing issue. Credit: Chesapeake & Ohio Canal National Historical Park 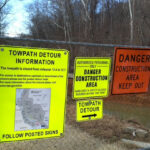 During construction, the parking lot and sections of the towpath will be closed. Be respectful of rangers and workers on site, and obey signs for your own safety. Details on closings and detours can be found at www.CanalTrust.org/parkprojects. Credit: C&O Canal Trust 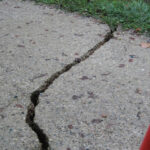 The breach started as a crack, but as the waters from Hurricane Hanna continued to flow past, the towpath broke off in huge chunks. Credit: Chesapeake & Ohio Canal National Historical Park 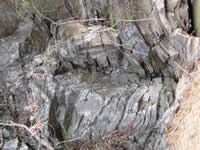 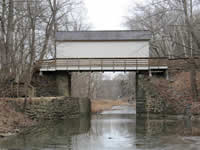 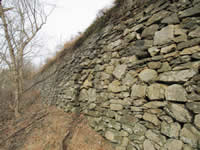