April is Archeology Month in Maryland

April is Archeology Month in Maryland! To celebrate, we wanted to bring you a look at the archeological work that takes place along the canal. The C&O Canal National Historical Park is home to nearly 300 identified archeological sites that span back approximately 9,000 years. Many more exist that have not been documented. 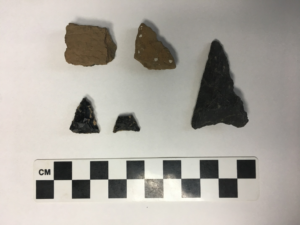 In the Middle Atlantic region, cultural remains from the past are often found in mixed contexts, requiring study by experts to determine their time period and significance. Although some sites near the Potomac River have been damaged over the years by erosion and recent human activities, many still contain intact remains associated with prehistoric camps and villages as well as historic occupation of the land by farmers, millers, miners, and the like.

Knowing the location of these sites helps Park staff protect these valuable resources against looting or destruction from proposed development. Whenever a new project is proposed that will involve disturbing the ground, the Park’s archeologist must investigate whether any remains will be impacted. Unfortunately, the erosion process threatens to destroy multiple sites in the not-too-distant future. The National Historic Preservation Act and the 1916 Organic Act mandate that the Park take steps to preserve these sites.

Recently, the Park initiated an archeology project at Ferry Hill Plantation to take another look at the history of the site. This area was first explored in the 1970s by the National Park Service in anticipation of the C&O Canal National Historical Park’s headquarters being based out of the mansion.

The plantation home was built in the early 1800s by John Blackford, on a bluff overlooking the Potomac River near Shepherdstown, WV. He utilized slaves to assist with household and business activities, such as operating his ferry and harvesting crops.

“We hope this new study will offer more insight into the daily lives of the people who once lived at Ferry Hill,” explained the Park’s archeologist Justin Ebersole. “The project has already completed an initial survey using standard shovel test pits on a grid to identify potential areas for additional study. Later this summer, we hope to conduct remote sensing surveys as well as excavating trenches in an effort to discover possible buried features. These could include building foundations and hearths that may be associated with enslaved people, which could shed light on their history.”

Stay tuned to the blog, where we will share the findings of this study as they become available.