Protecting the Past in the Face of Floods

With its location along the Potomac River, it’s not a matter of if the C&O Canal and its lockhouses will be flooded but when. The Canal has experienced flooding ranging from inconvenient to destructive throughout its history. In early June of this year, the Potomac reached its highest level in 8 years as rehabilitation work continued at Swains Lockhouse.

Many of the rehabilitation decisions at Swains Lockhouse have been made with an eye towards minimizing damage during future flooding. Joe Andera, superintendent of the Swains rehabilitation with contractor Vanguard Pacific LLC, explained the rationale driving his crew’s work. Beginning at floor level, all original subflooring was removed and replaced with pressure-treated subflooring and joists, as well as pressure-treated plywood on top of the existing slab. The new flooring is a Click-n-Go floating floor, easy to remove and replace in the event of flooding.

Thinking Ahead to Recovery

The walls at Swains are also designed to mitigate flood damage. All wall framing uses pressure-treated wood for moisture resistance. Perimeter walls use closed cell spray foam insulation to act as a vapor and water barrier that can be aired out after flooding. The wainscoting is backed with 3 feet of waterproof material that is easier to replace than drywall. All new electrical is placed at 36” above grade to provide some protection. The rear window in the living room has been raised 6 inches up from grade to place it above floodwaters. 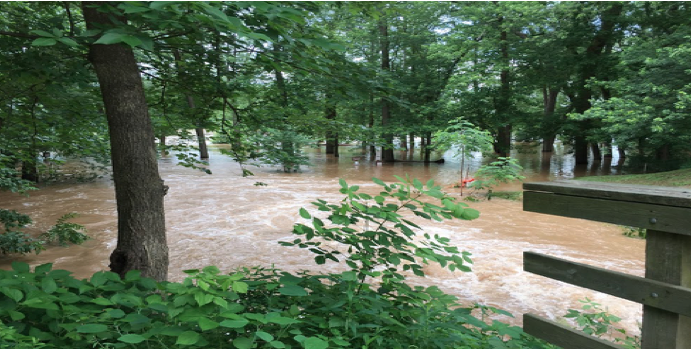 Early June 2018 inundation of the Swains hiker-biker campsite by the Potomac River.

Outside the Lockhouse, some grading will be done in the surrounding landscaping to promote positive drainage. A swale behind the house will be installed to deal with water coming down from the hillside. Both the C&O Canal Trust’s flood plan for Swains and the National Park Service’s flood control plans will help to protect the lockhouse and canal as much as possible.

Becky Curtis, Director of Programs and Partnerships with the C&O Canal Trust, shared that a full flood plan will be designed for Swains Lockhouse with specific actions for each river level crest. Much of the plan will be based on Swain family knowledge of past floods, such as the flooding they experienced due to Hurricane Agnes in 1972, and how they protected their house. The flood plan will include actions such as moving furniture to the upper level, sandbagging around the Lockhouse, and turning off electricity.

Metal flood markers on Swains façade serve as a visual record of past flood levels.

The National Park Service has its own flood control plan for preserving infrastructure and assets and ensuring visitor safety. This plan includes actions such as opening locks, altering water flow direction, and removing handrails to prevent demolition from debris. The C&O Canal provides critical flood protection for Washington, D.C., especially Georgetown. After the flood, wildlife relocation is provided for displaced and distressed animals—usually fish– and flood actions like sandbagging are removed.

Author Christine Rai is a college professor in the Washington, D.C. area with a passion for culture, food studies, and experiential learning. She blogs about food, travel, and teaching at www.christinerai.com.