Being from the desert southwest, I love how light reflects in and off of natural rock in the canyon country, changing color with the time of day. A cliff that looks vermillion at sunset might appear gray during the afternoon. Another may change from golden to magenta at sunrise. Like a painting, light plays an important role in these natural works of art. Each color evokes a different feeling - peace, anxiety, harshness, or beauty.

I was surprised and delighted to find exposed rock in the structure of aqueducts when I moved to the C&O Canal in Maryland. The eleven aqueducts along the C&O Canal are made from different stone - red sandstone, gray limestone, white granite, white and pink quartzite - each reflecting light differently.

The Monocacy Aqueduct, with its seven arches spanning 516 feet, is the largest aqueduct and one of my favorites. The white stones, cut with large saws, were brought from a nearby quarry. They were painstakingly hand-shaped by masons, then carefully placed together to build this impressive structure. The engineers who designed them chose to make the aqueducts decorative, as opposed to leaving them with a more utilitarian look.

Standing on top of the Monocacy Aqueduct, looking at early morning fog rolling off the Potomac, I imagine a canal boat coming upon this aqueduct in the 'middle of nowhere'. How magnificent to look upon this 'Work of Art'. Morning brings a quiet grayish white, turning to a harsh white by mid-afternoon, and changing to a soft gold with hints of magenta at sunset. Each time of day sets a different mood.

The next time you visit the Monocacy Aqueduct take the time to observe this work of art, take in its beauty and grandeur, and study the changing colors of light reflecting off its stones. 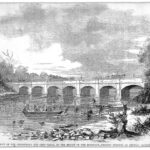 The Monocacy Aqueduct was the target of multiple attempts to sabatoge canal operations by Confederate Forces, because of this Union troops were a familiar sight on the aqueduct. Credit: Chesapeake & Ohio Canal National Historical Park 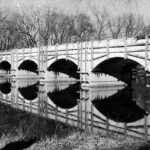 After the National Park Service acquired the C&O Canal, it was realized that the Monocacy Aqueduct needed some structural help. In order to stabilize the structure steel braces were installed. Credit: Chesapeake & Ohio Canal National Historical Park 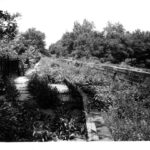 A 1941 view of the barrel of the Monocacy Aqueduct after the Federal Government acquired the C&O Canal, bringing the 184.5 miles under the authority of the Department of Interior. Credit: J. G. Lewis, Chesapeake & Ohio Canal National Historical Park 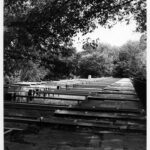 Steel braces were even placed in the barrel to secure the walls of the aqueduct from deterioration. Credit: W. Williams, Chesapeake & Ohio Canal National Historical Park 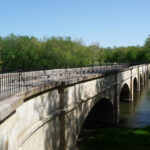 The longest aqueduct on the canal, the Monocacy Aqueduct truly is a magnificent site to behold. Credit: C&O Canal Trust 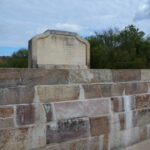 While you are there, take a minute to read the names on the only monument on the C&O. The engraved stone pays respect to the aqueduct engineers as well as the C&O Canal Company Board of Directors at the time of completion in 1833. Credit: C&O Canal Trust 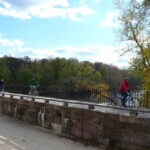 The Monocacy Aqueduct area is a popular access point for residents of Frederick and Dickerson to enjoy a walk or bike ride on the towpath. Credit: C&O Canal Trust 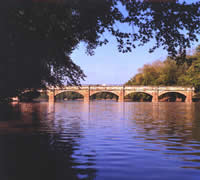 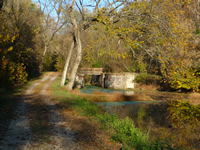 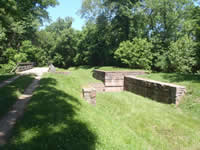 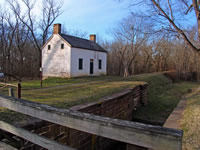 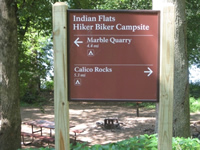