Hancock: Hancock to Fort Frederick via the C&O and Western Maryland Rail Trail

These itineraries, “Canal Towns: In the Shadows of the Civil War,” were developed, in part, with State Funds from the Maryland Heritage Areas Authority, an instrumentality of the State of Maryland. However, the contents and opinions do not necessarily reflect the views or policies of the Maryland Heritage Areas Authority. Photographs were provided by Judy Olsen Photography unless otherwise noted.

Europeans began arriving in the Hancock area as early as the 1730s. With the arrival of the Chesapeake & Ohio Canal (C&O) a century later, followed by a toll road connecting to the National Road, followed by the railroads, the town of Hancock boomed between the early 19th and early 20th centuries.
On these journeys in the Hancock area learn about the town’s history, including the Battle of Hancock during the Civil War. Walk or bike along the C&O Canal, an important dividing line during the war. Hancock is also the midway point for the Western Maryland Rail-Trail, and together the two trails offer the perfect round-trip exploration.
Itinerary 2: Hancock to Fort Frederick via the C&O and WMDRT

This full-day itinerary explores the C&O Canal towpath and Western Maryland Rail-Trail (WMDRT), from the town of Hancock to Fort Frederick, about 11.5 miles east.
Exploring the C&O Canal Towpath
Construction of the Chesapeake & Ohio (C&O) Canal began in 1828 with a ceremony featuring President John Quincy Adams. The bold project would enhance commercial trade between Washington, D.C., and points west—all the way to the Ohio River. But in 1850 canal construction stopped at Cumberland, MD, in the wake of numerous difficulties. The Baltimore & Ohio Railroad had arrived three years earlier, and the B&O replaced the canal as the primary mover of goods. Today the towpath is the Chesapeake & Ohio Canal National Historical Park, offering 184.5 miles of recreation by foot, bicycle, or horse (permits may be required).

Little did anyone know in 1828 that both the B&O Railroad and canal would become part of a battleground in a war that would divide the nation years later. As you travel along the towpath, imagine what it must have been like here during the Civil War. The Potomac River and the canal were frequently crossed by troops from both sides on the way to and from various campaigns. Troops traded volleys across the water, and smaller battles erupted here and there along its banks. Confederate troops confiscated boats, destroyed locks, and raided supply stores.
You can read more about the many skirmishes that took place near Hancock during the war in the “Pocket Guide to the Civil War on the Chesapeake & Ohio Canal” and the book “Trembling in the Balance: The Chesapeake and Ohio Canal During the Civil War,” both available at C&O Canal visitor centers.
Outbound (East) Along the C&O Canal
Miles represent towpath mileage.
Mile 124.1      Hancock

Park in the lot between Williams Street and Taney Street. One block west, C&O Bicycles will have everything you need for a bike journey, including rentals and repairs. You can also rent a bed in a bunkhouse here and get a hot shower.
Alternatively, park at the south end of Church Street where it meets the Western Maryland Rail-Trail. From here, look up the hill toward St. Thomas’ Episcopal Church. There on the hill, and from Main Street, Union troops defended the town in the Battle of Hancock on January 5–6, 1862. During the brief skirmish, Gen. Thomas “Stonewall” Jackson’s troops advanced on the town hoping to take control of the Potomac River and C&O Canal. The battle was the first of Jackson’s Romney Campaign.
The day before the shelling began, Jackson sent his cavalry commander Turner Ashby with a truce flag to try to persuade Gen. F.W. Lander to surrender Hancock. Lander refused. Only an estimated 75 to 100 shots were fired—the cold, wintry weather being a major factor. The Union maintained control of the town but the Episcopal church was badly damaged, as was the Presbyterian church just down the hill on Main Street. (The Presbyterian Church has a cannonball lodged in the front of the building.)
Cross the bridge to reach the towpath and head east (left).

Mile 123         Tonoloway Creek Aqueduct
The aqueduct, built between 1835 and 1839, is one of 11 such water-filled bridges along the C&O Canal. Aqueducts carried boats over major creeks that emptied into the Potomac, and some have been rebuilt; Tonoloway, however, isn’t one of them. Stop midway along the aqueduct for a scenic view of the river.
Mile 122.8–6  Bowles House Visitor Center (Locks 51–52)

Just beyond the aqueduct you’ll see the remains of Locks 51 and 52 as well as the Bowles House, now one of the C&O’s historical visitor centers. The foundations of an old lockhouse are also visible near Lock 51.
The stunning Bowles House was originally a one-story home built around 1780 by William Yates. The Yates family lived in the house when the C&O Canal was being built along this stretch in 1839. At least two other families owned the house, and it was occupied until the 1980s. Though the house has seen better days, it remains one of the C&O’s treasures. Two rooms on the ground floor showcase early photographs and the history of both the house and canal. Ask the ranger for a short tour (Memorial Day weekend–Oct, 9 am–4:30 pm, Fri–Tues).
Mile 120.6      Little Pool
Look for wildlife in and around this section of ancient river channel.
Mile 118.9      Millstone
During the Civil War, Union troops were stationed in Millstone to protect the canal.
Mile 116.1      Licking Creek Aqueduct
In 1839, when the canal arrived in Hancock, this single-arched aqueduct was first filled with water. It took two years to build.
Mile 113.8      Big Pool
Big Pool, another section of ancient river channel, was a natural depression when the C&O was built. The C&O Canal Company filled it with water and used it for a turning basin, where—as the name implies—“canawlers” turned their boats around. You can launch a boat on this small lake from a ramp at Fort Frederick. Watch for wildlife in and around the water.
Mile 112.5      Fort Frederick

The 20-sided wall of Fort Frederick was built in the 1750s during the French and Indian War to protect Maryland’s western frontier from attack. Inside the fort today are two reconstructed barracks with reproductions of period artifacts and a museum depicting area history. You’ll also find a visitor center, campground, and nature trails. Living history programs are available throughout the summer.
During the Civil War, Union troops were stationed here to protect the C&O Canal and the B&O Railroad from Confederates.
From the towpath, cross the bridge and the railroad tracks (use caution) to access the fort. Bike racks are available, and you’ll also find snacks and drinks in the visitor center. Hours change seasonally; visit Fort Frederick State Park online for more information.

Plan on spending at least an hour here before heading back to Hancock via the Western Maryland Rail-Trail.
Inbound (West) Along the WMDRT
The Cumberland Extension of the Western Maryland Railway arrived in Hancock in December 1904 and was both a passenger and freight line. Today, roughly 23 miles of the abandoned corridor—the Western Maryland Rail-Trail(WMDRT)—are paved for non-motorized recreation. The eastern end of the WMDRT begins just west of Fort Frederick.
You can access the trail from the fort by either heading back along the C&O Canal towpath (signs will guide you to the WMDRT) or by road. If you want to take the road, from the entrance of Fort Frederick, turn left on MD 56 (Big Pool Rd.) and go about 1 mile. Follow signs to the parking lot on the left.
At mile 2.7 on the WMDRT you’ll find Park Head Cemetery, with some very old headstones in a tiny burial ground. The route to Hancock follows a wooded corridor, which in places parallels Interstate 70 very closely. If you prefer to continue along the C&O Canal towpath instead, there are a few places where you can take a short trail to the towpath; look for the signs. 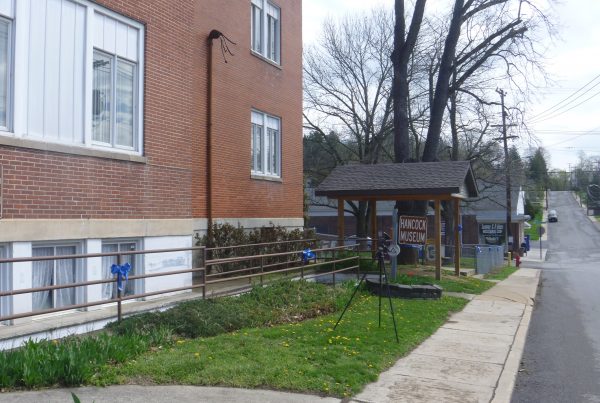 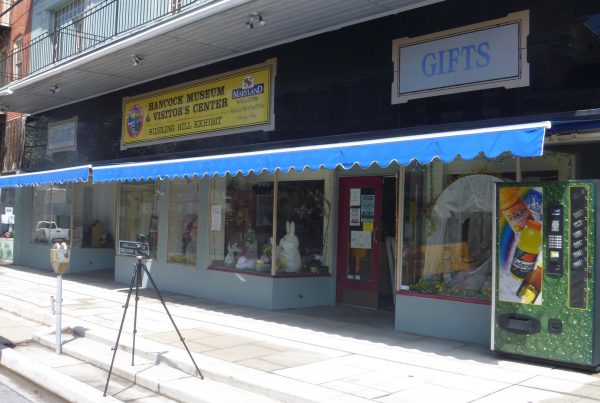 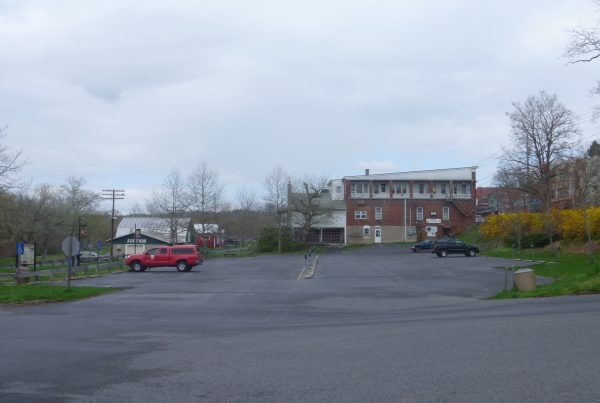 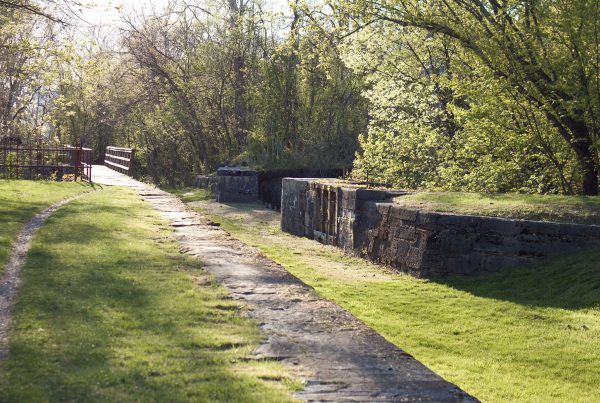 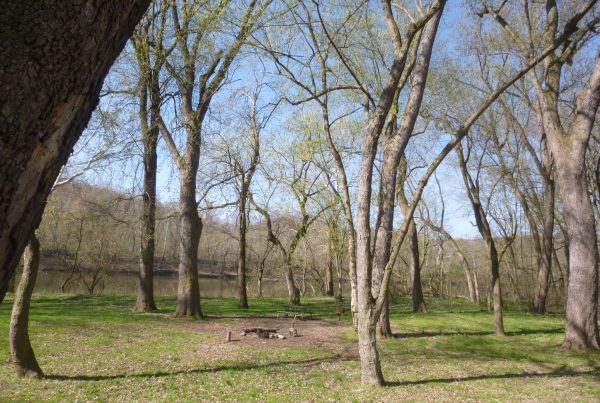 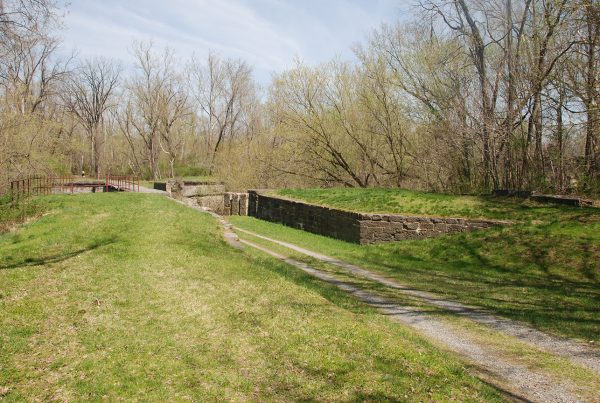 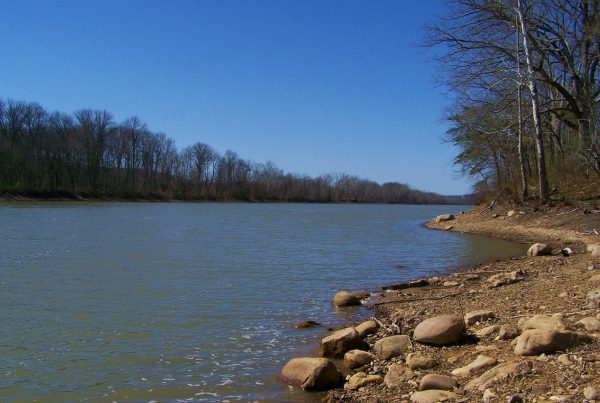 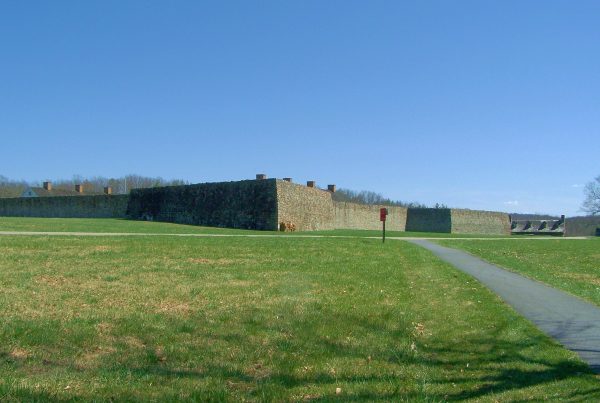 Fort Frederick State Park
Be the first to know about C&O news, projects, and events! Sign Up Now